Victor Oladipo and Aaron Gordon back in dunk contest 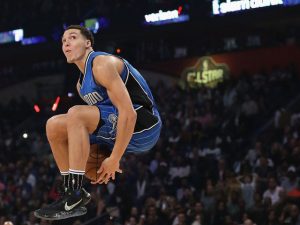 The contestants for the 2018 NBA All-Star Game Saturday in Los Angeles were announced Thursday night.
NBA All-Star Victor Oladipo of the Indiana Pacers, 2016 runner-up Aaron Gordon of the Orlando Magic and first-time participants Larry Nance Jr. of the Los Angeles Lakers and Dennis Smith Jr. of the Dallas Mavericks will display their aerial creativity in the 2018 Verizon Slam Dunk on Saturday, Feb. 17 at Staples Center in Los Angeles.
Check BetRegal.com and find the best online betting site.
In addition to the star-studded competitions, Daytime Emmy® Award winner and Extra host Mario Lopez will welcome fans and introduce the night, while Grammy® Award nominee Andra Day and Academy® Award winner Common will perform a special rendition of the 2018 Academy Award-nominated song “Stand Up for Something” from the movie Marshall.  Part of the NBA Voices platform and in celebration of Black History Month, the performance will feature current and former NBA and WNBA players and incorporate words chosen by a handful of players that reflect black history and culture, and their collective commitment to equality and diversity.
A first-time All-Star this season, Oladipo ranks 13th in the NBA in scoring (career-high 23.9 ppg) while shooting career highs of 48.8 percent from the field and 39.2 percent from three-point range.  This is his second Verizon Slam Dunk appearance, having finished second to Zach LaVine in 2015.  At the inaugural NBA Awards last June, Oladipo won the fan-voted Dunk of the Year for the 2016-17 season.  The 6-4 guard is seeking to become the second consecutive Pacer to win the event; Indiana’s Glenn Robinson III, the 2017 champion, is working his way back from ankle surgery.
Get all the latest Betting and Sport News updates on your social media outlets. Find us on both Facebook and Google+
This marks the third consecutive Slam Dunk appearance for Gordon, whose runner-up finish to LaVine in 2016 included three straight perfect scores of 50.  In his fourth season, the 6-9 forward is averaging career highs of 18.4 points and 8.3 rebounds.  He has already set a career high for three-pointers made in a season with 79.  Gordon has scored at least 40 points in a game twice this season – the first Magic player to do so since Dwight Howard in the 2010-11 season.