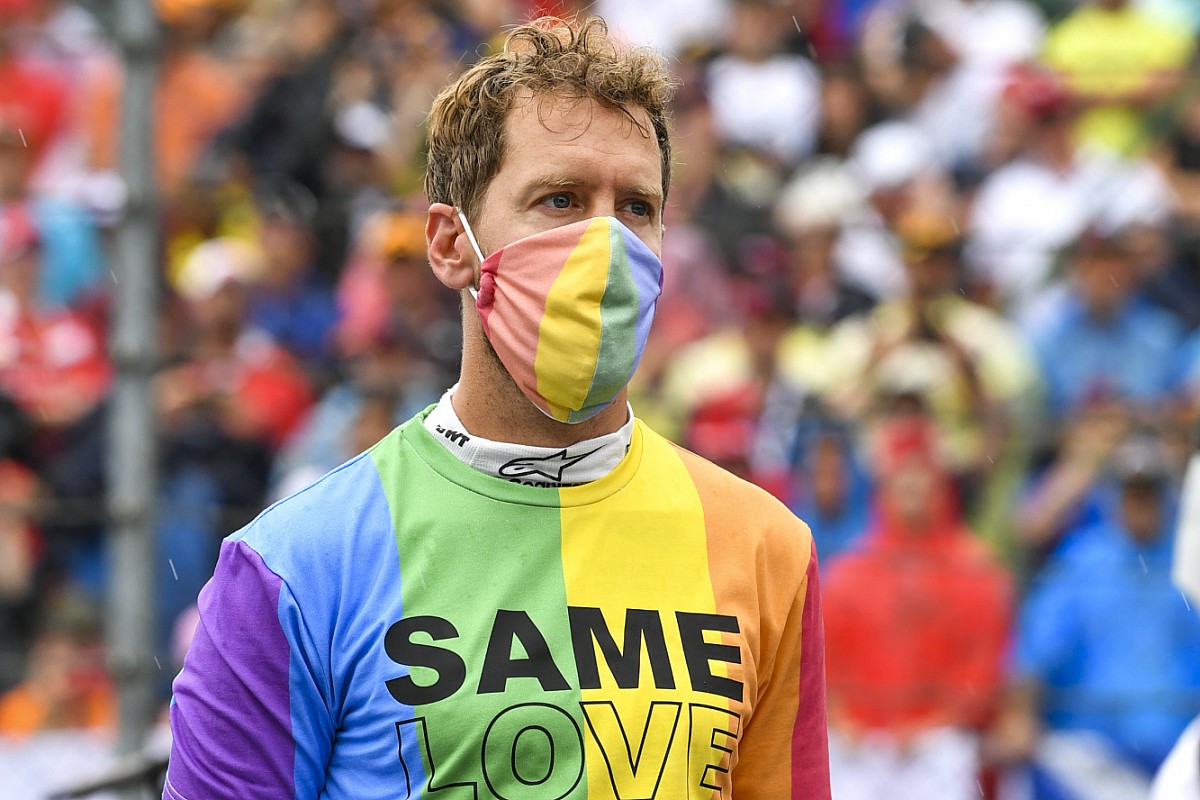 Sebastian Vettel has been reprimanded for wearing a rainbow-coloured t-shirt with the words “Same Love” on it during the national anthem ceremony ahead of the Hungarian Grand Prix.

Vettel wore the t-shirt in order to protest recent legislation in Hungary aimed at limiting the discussion of homosexuality and transgender issues in schools. Hungary’s Prime Minister Viktor Orban has stated the country will hold a referendum on the issue by early 2022 at the latest.

Vettel was one of four drivers reprimanded for wearing a t-shirt over his race overalls during the national anthem at the Hungaroring, which contravenes the race director’s pre-race notes.

The FIA introduced a rule within the notes last year which said drivers should not wear t-shirts over their race overalls during the national anthem or on the podium after Lewis Hamilton wore one with a message saying, “Arrest the cops who killed Breonna Taylor” at the 2020 Tuscan Grand Prix.

Drivers do, however, have a designated moment ahead of the national anthem in which they are encouraged to wear t-shirts promoting messages of diversity and inclusion.

Vettel opted to wear his own t-shirt in pride colors, while the other three drivers who failed to remove their shirts ahead of the anthem in Hungary — Valtteri Bottas, Carlos Sainz and Lance Stroll — were wearing black Grand Prix Drivers Association shirts with the message “We Race As One” (WRAO).

All four drivers were summoned to the stewards for an “alleged offence,” with Vettel missing part of the post-race press conference as a result, in which a question on the shirt was asked of him but could not be answered.

Asked about the decision to wear the t-shirt by TV reporters directly after the race, Vettel said: “We all stand on this carpet ahead of the race where we have all these nice slogans, yet it seems to be a problem for some people.

“I don’t understand. It’s a sad world in some regards, but if it helps for supporting those people who suffer in countries that are part of the European Union, I’m happy to express myself.”

Asked if he was worried about being summoned to the stewards, Vettel added: “They can do whatever they want to me I don’t care, I would do it again.”

However, when the stewards issued reprimands to all four drivers the summaries of the offence were identical in all four cases and read as follows: “The driver explained that he forgot to take off the WRAO t-shirt in time during the national anthem because of the onset of rain.”

When asked by ESPN, FIA race director Michael Masi was unable to confirm whether Vettel had actually told the stewards that he had forgotten to take his t-shirt off — a statement which seemed to be at odds with his earlier comments to the media.

Reprimands do not carry a sporting penalty in F1 unless a driver accrues three of them in one season and at least two of the three are for driving offences rather than off-track incidents.