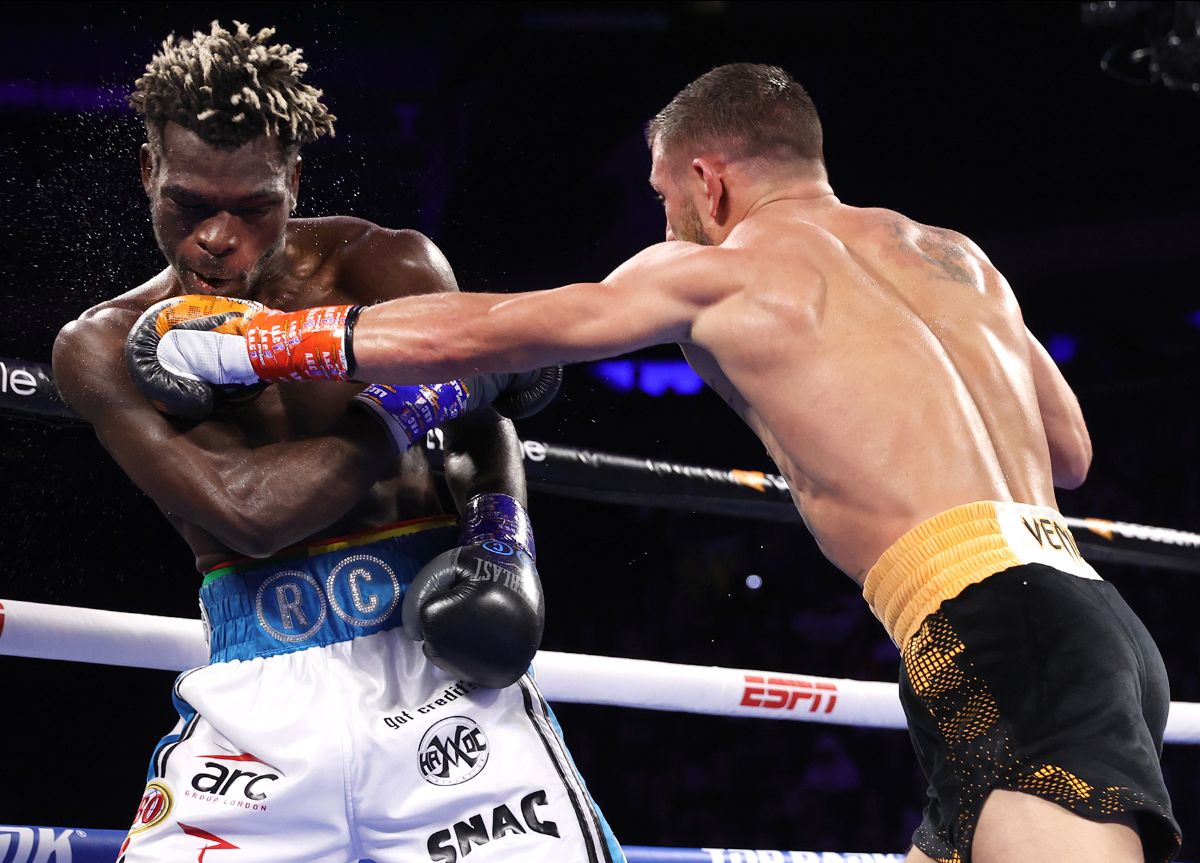 Vasiliy Lomachenko floored Richard Commey hard in Round 7, leaving his adversary on wobbly legs and in big trouble. He pleaded with Commey’s corner to stop the contest, but it allowed the marquee fight to continue.

The stoppage never materialized for Lomachenko after that, but he still won in dominant fashion on Saturday at New York’s Madison Square Garden, a unanimous decision triumph that continued his march toward another shot at boxing’s lightweight title.

“I saw his situation, it was very hard for him,” Lomachenko, a native of Ukraine, said of the seventh round. “That’s why I said, ‘Hey, stop the fight.’ He is a true warrior. He has a big heart and we continue and we show for people 12 great rounds.”

The greatest fight of all for Lomachenko, at the moment, would be with George Kambosos Jr., who upset Teofimo Lopez for the undisputed lightweight championship two weeks ago.

Lopez was coming off his own upset victory, a decision victory over Lomachenko last October.

With a rematch versus Lopez no longer his priority, Lomachenko (16-2, 11 KOs) said he’ll travel to Australia for a shot at Kambosos. That is, of course, if Kambosos picks him. There were four high-stakes bouts in the 135-pound division inside 15 days. After Kambosos’ victory in New York, he traveled to Las Vegas to watch Devin Haney outpoint Joseph Diaz Jr.

The following day, the Australian was ringside in Los Angeles for Gervonta Davis’ tougher-than-expected win over Isaac Cruz.

“I need this chance [for the undisputed title],” said Lomachenko, 33. “I will go anywhere I need to go to fight him. … I need all four belts.”

The two-time Olympic gold medalist appeared in vintage form, utilizing angles and exceptional footwork to find openings to deliver pinpoint punches. Lomachenko absorbed many hard shots, particularly to the body, from the game Ghanaian, but the punches never seemed to affect him.

Lomachenko’s shots, however, did trouble Commey. He picked apart the far larger Commey in the clinch, showing off his ever-improving inside game.

A former 126- and 130-pound champion, Lomachenko broke through in Round 7 when a sweeping left crashed into Commey’s chin and dropped him to the canvas. But instead of closing in for the dramatic finish, Loma motioned to trainer Andre Rozier to save Commey from further damage.

Then Lomachenko poured on a barrage of punches, and Commey again seemed ready to go. Referee Steve Willis moved in for closer inspection as Commey’s legs appeared bent, shades of his second-round TKO loss to Lopez two years ago. But Commey somehow made it out of the round, and with it, Lomachenko lost his moment, perhaps, to stand out among the lightweights.

By the time Round 8 rolled around, Commey (30-4, 27 KOs) seemingly cleared his head. He absorbed plenty more punishment as the rounds tolled but the former titleholder was never again in serious danger.

Commey, who entered the fight ranked No. 9 by ESPN at lightweight, threw more punches than Lomachenko, yet was outlanded 248 to 73. Even in defeat, Commey improved his stock with the gutsy effort and helped wipe away the image of Lopez’s domination to win the title.

Lomachenko, meanwhile, is attempting to get past his own loss to Lopez. ESPN’s No. 2 lightweight stopped gatekeeper Masayoshi Nakatani in June, his first action since surgery to repair a torn rotator cuff. He fought Lopez with the injury, and topped his rival by delivering a better performance versus Nakatani (Lopez had struggled to a decision win over Nakatani in 2019).

But against Commey, he failed to outdo Lopez, and it remains to be seen if the performance was enough to lure Kambosos into the ring. Lomachenko showed no interest in a proposed fight with 130-pound champion Shakur Stevenson, saying that his only goal is to fight for 135-pound titles, but there are other attractive fights at lightweight. A fight with Davis would generate substantial commercial interest, as would a bout with Haney.

No matter whom he fights next, Lomachenko is still one of the 10 best pound-for-pound boxers in the world. The mission stays the same, and he’s one step closer to a shot at the undisputed championship.