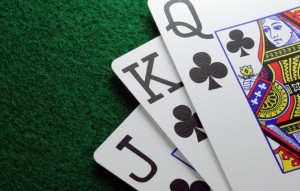 Check Regal Poker for Latest Poker News, poker strategy tips and more.
What are the odds? As a poker player, that’s the first thing you should ask.
Using the poker odds is essential for advanced strategy in no-limit and limit Texas holdem. The math surrounding any type of Texas holdem tournament become astronomical during the late stages due to the way chip values change throughout the tournament. Especially towards the end. And relate to when to players chip stacks are different sizes.Texas Holdem Poker Odds also apply to many other topics.
At Regal Poker you will find the best articles about how to play poker, visit us and check out our promotions we offer you the best online poker games.
Here some key numbers to get your play off the ground.
Premium hands. The chances of getting a top starting hand (of double aces, picture pairs or A-K suited), is a minute 2.1%. Hold out for one of these and you’ll never get started.
Feeling flush?. If you’ve got a flush draw (one card short of a full flush) after the flop, you’ll make your hand 34.97% of the time. That’s just over a third.
“But they were suited!”. Don’t play any two cards just because they’re suited. It only improves your hand by 2.5%.
Paired up. The chance of one of your hole cards making a pair on the flop is 32.43%, or about a third.
Hitting the board. By the river, your chances of making a pair go up to roughly a half.
Straight talking. If you flop an open-ended straight draw this gives you eight outs (eight possible cards that will complete the hand), so you’ll hit your hand by the river 31.5% of the time. Just make sure you’re getting pot odds (the value of the pot versus the value of your bet) to see the next card.
Three of a kind. If you already have a pair, the odds of flopping a set (three of a kind) are only 7.5/1 – so make sure you only play small pairs cheaply, and only if the pot is worth it.
Inside straight. Rarely worth drawing to, with the turn and river cards to come you’ll hit your gutshot straight (four outs) approximately 9% of the time.
Over-pair. When two pairs go head to head, the bigger pair will win roughly 80% of the time (or four times out of five). So if you’ve got queens, and see a bet, raise and re-raise in front of you, you might be up against aces, kings, or possibly both. Time to fold.
Perfect cards. If you need two exact cards on the turn and river, the chance of getting them both is only 0.3%. If you get one, there’s a 4.55% chance of getting the other.
It’s a race. A pair against two overcards is often called a coin-flip or race, because they each win about half the time. If the overcards are suited, the pair will win 46%-54% of the time, if not, 48%-57% of the time.
Kicker trouble. If your top card matches the other person’s, but your kicker is smaller (for example, queen against either ace or king, you’ve only got a 24% chance of winning (or about one in four).
Suited connectors. People talk about middle suited connectors being better than aces, because of the straight and flush possibilities. But if you’re holding the aces, don’t panic – the over-pair will beat the suited connectors approximately 80% of the time.
Pocket pair. It might not feel like it, but you’ll be dealt a pocket pair on average once every 17 hands, or about 6% of the time.
Flush up. There’s a reason for folding low hands. Even if they’re suited, the chance of flopping a flush is only 0.8% – or 124/1.
Two by two. The probability of flopping two-pair (from non-paired hole cards) is about 2%.
Full house I. If you do get two pair on the flop, the chances of making at least a full house by the river is 16.74%.
Full house II. But if you flop three-of-a-kind, the odds of making a full house or better by the river go up to 33.4%, or one in three.
Live cards. You bluffed with random cards to steal the blinds and were called by A-K. Oops! Actually, your random lower cards will win about 35% of the time.
Don’t get hooked. Pocket jacks is known as a big danger hand in Texas Hold’em. It may look good, but the chances of a higher card turning up on the flop is 52%, giving your ‘fish-hooks’ less than half a chance of survival.