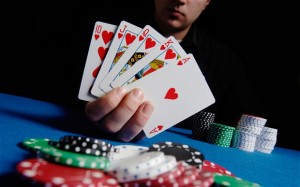 Check Regal Poker for Latest Poker News, poker strategy tips and more.
(pokernews.com)- The United Kingdom Gambling Commission released figures for the Gross Gambling Yield (GGY)of the non-remote British commercial gambling industry, not including lotteries, and revealed that for the period of April 2014-March 2015, GGY was up 2% to more than £5.4 billion.
Sports betting makes up the bulk of the total £5.444 billion total, accounting for £3,249 billion, with casinos GGY exceeding £1 billion for the second consecutive year (£1.161 billion). Both GGY for sports betting and casinos increased compared to the same period in 2013, but both arcades and bingo saw drops in GGY to £371.66 million (from £377.46m and £672.39m respectively).
At Regal Poker you will find the best articles about how to play poker, visit us and check out our promotions we offer you the best online poker games
The National Lottery (both remote and non-remote) increased by £132.3 million to £3.232 billion while other lotteries also saw an increase in GGY to £361.62 million, their highest ever total.

The betting industry in the UK is dominated by four main operators, with William Hill pippingLadbrokes to the title of biggest (based on number of betting shops) by 146 betting shops. However,once Ladbrokes and Gala Coral Group complete their merger, the latter has 1,850 shops, the newly merged company will own 4,016 outlets compared to William Hill’s 2,313.
A total of 148 casinos operated up to March 31, 2015, with Rank Group owning 63 of those; Rank are the owners of the Grosvenor and G Casinos. Genting UK have 41 properties, London Clubs International nine casinos with other operators having a combined 35.
Since the passing of the Gambling (Licensing and Advertising) Act 2014, where remote gambling companies have to be licensed within the United Kingdom in order to offer their services to Britons, some 719 licenses have been awarded. The bulk of these, 233, are in the hands of gambling software providers, with 176 being handed out to casinos.
These figures suggest that the gambling industry is thriving in the UK and if the current trend continues, the UK gambling industries GGY could surpass £6 billion within the next five years.
Don’t miss our special articles about Texas Hold’em and blackjack, become the best player that you can be! Get all the latest PokerNews updates on your social media outlets. Follow us on Twitter and find us on both Facebook and Google+!

How to induce bluffs?

How to be a Good Blackjack Player