UEFA Champions With The Best Sportsbook 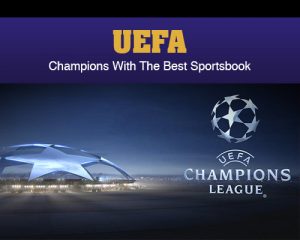 The Champions League started in September and has most football fans locked to the screen every other week. After international break the squads hit the fields again for week 3, on October 18th and punters need to get in the action with the best sportsbook for the UEFA champions league.
The most popular league in European football is in the middle of the group stage and there are still some exciting games to look forward to. Every year champion teams from most European countries compete with each other to see who is the champion of them all.
We figured you are busy with parenting and work to help you out with scheduling the most important matches that are coming in the next round and how you can make the most of it with the best lines and betting odds, available only at the best sportsbook.
Get all the latest Sports Betting updates on your social media outlets. Find us on Facebook!
Starting on Tuesday teams get ready to play hosts for the day, Legia Warsaw will host their Champions League game against Real Madrid. The particularity of this game, besides the obvious betting value is that it will be played behind closed doors in spite of the Polish Club’s appeal against stadium ban. It’s been confirmed that the UEFA rejected it.
Warsaw were originally charged with six offences after crowd trouble marred the Champions League game against Borussia Dortmund in September.
The match ended with a thumping 6-0 scoreline for the German visitors, but the disappointment of defeat was compounded by the disgraceful scenes at the Polish Army Stadium.
A small but organised minority in the 28,000-strong crowd tried to attack the away fans, covering their faces and using pepper spray against security staff.
The charges against Legia related to crowd disturbances, fireworks, throwing objects, insufficient organisation and blocking stairways.
‘Consequently, the UEFA Control, Ethics and Disciplinary Body’s decision of 28 September 2016 is confirmed. The club has also been fined E80,000.’ That’s that for group F.
Contrasting, Tottenham Hotspur have sold out Wembley Stadium for the upcoming Champions League group matches against Bayer Leverkusen and CSKA Moscow.
Winning positions in both their previous fixtures in Group E ultimately produced only two points for Bayer Leverkusen, and they will be wary when Tottenham visit on match day three.
Tottenham set a new home attendance record for an English club and for a home Champions League game in Britain after 85,011 watched the 2-1 defeat to Monaco at the 90,000-seater national stadium last month.
Spurs won their second group game 1-0 at CSKA Moscow last week and it now says all available tickets for matches against Bayer Leverkusen, on Nov. 2, and CSKA on Dec. 7 have sold out.
The club will play all European matches at Wembley this season while White Hart Lane is being redeveloped, and they are set to play all home games at the stadium next campaign.
Manager Mauricio Pochettino said last month: “It is a good opportunity to really understand size of this club. Because White Hart Lane is 36,000 but now we have the possibility to bring 90,000 people. This impresses us, and maybe the people realise the size of the club.” You can be part of the excitement of UEFA champions by playing at the best sportsbook. Sign up at Regalpoker.com

Lots of Football – Lots of Mistakes