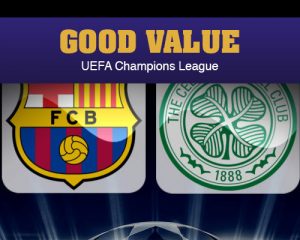 Match Celtic vs. Barcelona will bring us lots of excitements and will be a perfect choice of good value to bet and a lot of fun to watch.
Strong in name and reputation but short in performance, this is what Barcelona looks like after their start in La Liga, the worst in a decade. They just came from a 0-0 draw in Malaga who were considered as absolute outsiders and whose players earned two red cards in this match. With this result Real Madrid managed to go four points clear at the top of the table.
The Spanish giants have only won two of their last five games and tasted defeat in their last Champions League outing when they were beaten 3-1 by Manchester City but they are still first placed team in the group and certain participant in the knockout stage.
Celtic will of course consider these as ‘first-world problems’, with Barça still out in front of Group C, still at the top of the table, currently on a second place.
Get all the latest Sports Betting updates on your social media outlets. Find us on Facebook!
Brendan Rodgers’ Celtic team are rock bottom of the group with just two points. They are flying in Scotland, with a ten point lead at the top of the Premiership, but the uncompetitive nature of their domestic league only serves to make the step up in class a bigger hurdle when they compete in Europe.
Celtic do at least have a serious cutting edge these days in the form of the 20-year old Moussa Dembele. Signed from Fulham in the summer, Dembele already has 16 goals in 25 games, which includes five in ten European appearances, with the French striker bagging a brace in the thrilling 3-3 draw with Manchester City.
When it comes to their mutual encounters Barcelona won in their last three matches scoring sixteen goals while conceding only two. They are statistically favorites in this match but we should not underestimate Celtic especially now when they play in front of their supporters. Both teams will play open in this match and we expect to see many scoring chances and lots of excitements on the field.
In their first match Barcelona completely humiliated Celtic with 7-0 victory. However, after that Celtic played draw 3-3 against Manchester City who once again defeated Barcelona 3-1 in their last match in the Champions League. Celtic are playing very good this season and they are absolute leader at the table in Scottish championship and the only team still without victory. They are entering this match eager to revenge for humiliation in their first match and we can expect very aggressive and offensive tactics from the first minute.
Celtic may have no chance of making the knockout stages, but Celtic Park always provides an electric atmosphere for these sort of games, which can serve to energise the team beyond their normal capabilities.
It would be no surprise if Celtic could get on the scoresheet against a Barça side not at its best. The Scots have found the net in all but one of their last 13 games and the 1.96 on offer for both teams to score looks pretty good value. Sign up at regalpoker.com