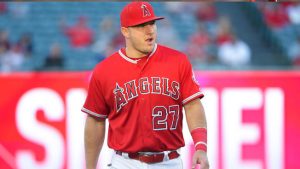 The Los Angeles Angels play the finale of their homestand with the Milwaukee Brewers on Wednesday night seemingly having solved the hitting problem that plagued them to start the season.
After scoring only 13 runs while losing five of six games to start the year in Oakland and Seattle, the Angels have won five of six at home while scoring 35 runs and hitting 13 home runs. They beat the Brewers, 11-8, on Tuesday.
Mike Trout, who left Tuesday’s game with a right groin strain and is day-to-day, has led the way. Angels manager Brad Ausmus said Trout is “not likely” to play Wednesday for precautionary reasons.
While Trout and the offense as a whole have gotten hot, there is one Angel who is yet to get going. Third baseman Zack Cozart went 0 for 4 Tuesday and is now hitting .033 (1 for 30).
He is also dealing with a sore left wrist and forearm, the result of getting hit by a pitch Sunday by Texas’ Shelby Miller. X-rays were negative, but the discomfort hasn’t exactly helped Cozart shake his early slump.
Check BetRegal.com and find the best online betting site.
Cozart, who was dropped to No. 9 in the batting order Tuesday, says he has no other choice but to keep grinding.
“The only way as a baseball player to stay sane is to keep playing,” he said. “I feel like my whole career, I’ve been a grinder type of guy. You have those ups and downs, but you just play, you get through them.”
Felix Pena (0-1, 5.40 ERA) will get the start for Los Angeles, still looking to finish at least five innings in a game. He lasted 3 2/3 innings in his first start and 4 2/3 innings in his second.
He has a career record of 0-0 with a 1.93 ERA in five games against Milwaukee, but all five appearances were out of the bullpen. Among current Brewers, only Ben Gamel has a hit against Pena (single), and overall the current roster is 1 for 9 against him.
Get all the latest Betting and Sport News updates on your social media outlets. Find us on both Facebook and Google+
Brandon Woodruff (1-0, 6.00 ERA) will start for Milwaukee and is coming off an abbreviated outing as well, lasting just four innings and giving up four runs on six hits and two walks in Friday’s 13-10 win over the Cubs. He had eight strikeouts.
Woodruff has never faced the Angels.

Blazers battle Lakers while looking to clinch No. 4 seed