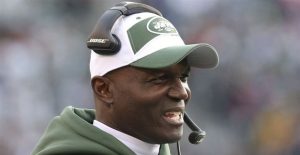 Vic Fangio’s departure to be the head coach of the Denver Broncos, an overdue opportunity decades in the making, isn’t ideal for the Chicago Bears. Losing out on a highly respected alternative also stings.
The NFL’s best defense this past season was Fangio’s baby, one he fostered over four seasons through tough love, attention to detail and a wealth of defensive expertise that’s nearly unmatched across the NFL.
The timing of Fangio’s hiring by John Elway, however, looked potentially fortuitous for the Bears. Todd Bowles was fired as the New York Jets’ head coach just last week, and the former Assistant Coach of the Year quickly emerged as an option for the Bears to replace Fangio.
Reports initially indicated that Bowles would join new Tampa Bay Buccaneers head Bruce Arians’ staff, as they have a long-rooted relationship. But before Bowles had signed a new contract, there was word that Bears head coach Matt Nagy’s long relationship — Nagy’s father once coached Bowles — and the chance to work with the Bears’ more talented personnel could re-route him to Chicago.
Check BetRegal.com and find the best online betting site.
That all changed when ESPN reported Bowles would indeed officially reunite with Arians in Tampa Bay. Arians’ confidence in talking about Bowles being on his Tampa staff — when it still seemed up in the air — during a conversation with NFL Network’s Rich Eisen on Wednesday seemed to indicate which way the wind was blowing.
Arians addressed Bowles’ addition during an appearance on “The Rich Eisen Show” on Wednesday.
“He’s like a son to me,” Arians said of Bowles. “We’re really excited to be back together.”
Get all the latest Betting and Sport News updates on your social media outlets. Find us on both Facebook and Google+
Arians also confirmed that Byron Leftwich and Harold Goodwin will be on the Tampa Bay staff.
“Byron Leftwich will be calling the plays,” said Arians, who had a number of health-related issues throughout his coaching career. “I’ll obviously have a big hand in it and be on there with him. But I trained Harold Goodwin and Byron Leftwich the last few years to handle that job, and I feel very, very comfortable with them.”