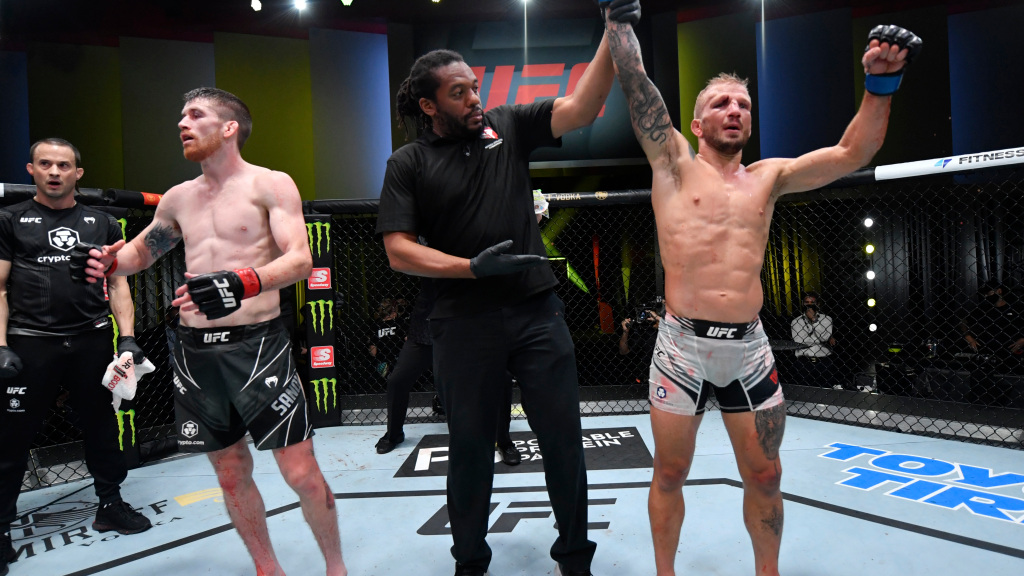 Any questions about TJ Dillashaw’s standing in the bantamweight division after a long layoff have been answered — emphatically.

Sandhagen opened up a nasty cut between Dillashaw’s right eye and nose, but he still gutted it out over five rounds.

Dillashaw was coming off a two-year suspension from the United States Anti-Doping Agency (USADA) due to a positive drug test for EPO. He had not fought since January 2019 when he lost a flyweight title fight to Henry Cejudo via TKO in 32 seconds.

“I wasn’t worried about the naysayers,” Dillashaw said on the postfight show on ESPN+. “I knew I was going to get this victory. Very tough fight. To me, this was the title fight. Cory Sandhagen is legit. I’ve trained with him. I knew he was that good before he knew he was that good.”

He added: “I shut everyone up. It feels good.”

Coming in, ESPN had Sandhagen ranked No. 3 in the world at bantamweight. Afterward, Dillashaw stated he wanted an opportunity to get his title back next. He was stripped of the belt when he failed the drug test. Aljamain Sterling will defend that title later this year versus Petr Yan in a rematch of a controversial bout at UFC 259 on March 6.

Dillashaw said he did no sparring this camp due to injuries and a cut near the spot where he was cut Saturday night.

He and Sandhagen were once training partners with Elevation Fight Team in Colorado. But it didn’t seem like either gained any advantage from those past experiences.

Dillashaw said afterward that it took him a while to get his feet underneath him, but it didn’t look like he was experiencing any ring rust right from the start. He won the first round with combinations and was able to land shots from top position after a takedown.

However, Sandhagen popped Dillashaw’s knee, Dillashaw said afterward, in a leg-lock attempt near the end of the first. Dillashaw said he wasn’t able to throw as many hooks after that.

Sandhagen gained the momentum in the second round, landing a big combination that not only rocked Dillashaw, but opened up that cut near his eye. Referee Herb Dean momentarily paused the fight and brought in the doctor, but Dillashaw was permitted to continue despite the deep, bloody cut.

Early and often during the fight, Dillashaw was attacking Sandhagen’s legs, and those really started to accumulate as the fight got into the later rounds. Dillashaw said his coach, Duane Ludwig, was telling him to “chop down the tree” from the corner.

“The game plan was to take his legs out,” Dillashaw said. “He’s a tall dude.”

Dillashaw finished the third round strong after a takedown attempt and some hard shots in a clinch against the cage. Sandhagen came back with hard shots in the fourth, including a spinning back fist. Both men had moments in the fifth round, with Sandhagen landing hard punches and Dillashaw getting through with a couple of combos.

Sandhagen (14-3) had won two consecutive coming in and has won seven of nine overall in the UFC. The Colorado native was coming off a 28-second flying knee knockout of former lightweight champion Frankie Edgar, one of the best KOs of 2021. Sandhagen, 29, is regarded as one of the best fighters in the world under 30 years old.