Thinking Ahead with Online Poker Strategy 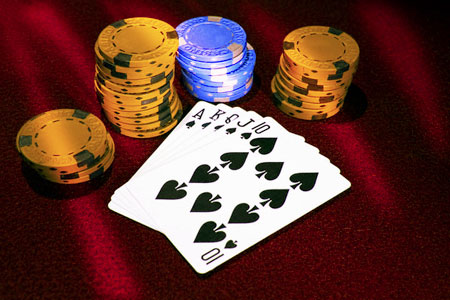 Playing online poker might seem like it puts a player at a disadvantage not being able to see the other players’ faces. So much is written on a player’s face who forgets that body behavior can give away a book’s worth of information to an observer. However, the Internet and virtual poker seems to eliminate this advantage, or does it?
Reading the Cards
One of the oldest ways of playing poker without focusing on the players involved is watching the cards dealt and played. In some extreme cases card-counting has given a person a huge advantage over others because there are only so many possibilities left if a person can master remembering what was already played. As a result, regular casinos are not keen on having counters anywhere near their tables and kick them out on sight. That said, the same principles can apply in the virtual world. So, if you have a photographic memory and you’re a whiz at statistical probability, online poker strategy may seem like child’s play as a result.
Greed Pays Off
For the rest of us, however, genius mathematical brain power isn’t available, so we have to rely on other tools for poker strategy. One method is to feint and see what a player does. Human greed is often a weakness, no matter how good a player may be with cards. Especially with rookies, greed can often trigger a gut reaction that gives away a player’s card position. That in turn can signal whether to stay in on a hand or get out and save ammunition for the next deal. Easy ways to trigger a greed reaction is to throw a card out that is clearly part of a certain hand. If a player practically breaks the screen for that card, well, you know their hand’s likelihood at that point.
Player History
Another way to potentially figure out a player’s standing and potential skill in a hand is his player history and profile. If he’s a shark with a high win rate and hundreds of games on his history, if available, that’s probably a table to avoid. Folks with similar and closer player histories tend to provide better games for a user as they also tend to have the same skill level or less. Let the sharks beat each other up and progress slowly but evenly with winning instead.
Player Logs
Sometimes going back and looking at the game logs will show patterns of how players perform. Some players give themselves away with the same strategies again and again. This knowledge can come in handy when dealing with the same player again in a new hand. It’s a bit like watching your opponent’s football game videos the week before playing them on the gridiron. Except in this case, the field the virtual poker table. All’s fair in gambling online when the logs are available to everyone.

Omaha High-Low: What to Know About Starting Hands

Poker table presence and the game