The History Of Blackjack 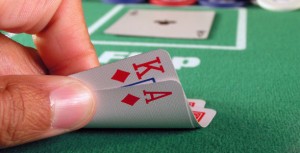 Check Regal Poker for Latest Poker News, poker strategy tips and more.
The game of Blackjack has been around for well over 400 years, and over these years it has developed from a very boring, high house edge game into one with dozens of different variants.
Blackjack came from games in France and Spain. The version that eventually swept across Europe was called “Vingt-un” or “Vingt-et-un”, but it was very likely predated by other games such as the French “Quinze” and the Italian game of “Sette e Mezzo”. The oldest forefather of blackjack, based on the research of blackjack historians like Roger Baldwin and Arnold Snyder, seems to have been the Spanish game “Trente-un”. A priest referenced the game in 1440, and the author Miguel de Cervantes mentioned Trente-un in a 1570 text. These stand as some of the oldest references to what eventually became the game of 21.
At Regal Poker you will find the best articles about how to play poker, visit us and check out our promotions we offer you the best online poker games.
All of these games involved cards with values and a goal of drawing as close to a certain value without going bust. Some of them included the idea of an ace having a fluctuating value of one or eleven. The game of 21 became popular in Europe, very possibly because it was one of the few games that had all the appearances of requiring skill, as opposed to merely luck. The player made decisions on whether to hit or stand. Making decisions always gives players a feeling of control.
The game was still termed ‘21’ when it gained popularity in Nevada in 1931 as the State first chose to make gambling legal. To draw more people to the game, some casinos then offered a special bet: A hand featuring either of the black jacks (the Jack of Spades or that of Clubs) plus the Ace of Spades would pay 10-to-1 odds on the lucky player’s bet. Although casinos later discontinued this peculiar payout, the name ‘blackjack’ or ‘black jack’ remained, as the game is known today.
Blackjack was not conceived by any one person at one definite point of time. On the contrary, blackjack has evolved over centuries; it continues to evolve and grow even today, thanks to the Internet. Fuelling its popularity the online casino industry has developed various versions of the game which has truly revolutionized it.