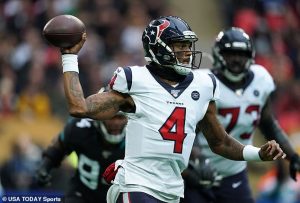 The Houston Texans slaughtered the Jacksonville Jaguars 26-3 at Wembley.

The sixth-round rookie finally looked exactly that as he was picked twice and lost two fumbles in the space of four late drives, but in truth the last game of the 2019 London series was dead long before that.

Deshaun Watson (22 of 28, 201 yards, two touchdowns) was clean and efficient versus a disappointing Jags defense, and was aided by a huge rushing performance from Carlos Hyde, who finished with 19 carries for 160 yards at an average of eight per touch.

The Jags needed a spark to start the second half, and they tried to create one with an audacious faked field goal, but Logan Cooke was hit hard and fumbled the ball, allowing Houston to take over on the halfway line and Fairbain to add another three points from 42 yards.

They only needed five plays to take it 79 yards for their second touchdown and create some deserved daylight between the teams. Carlos Hyde ripped up the right side for a big gain to the Jacksonville 23 and Watson hit DeAndre Hopkins over the middle to the one, before Duke Johnson skipped round the Jaguars defensive line and into the end zone.

The Jaguars were forced to be bold again on the next drive, going for it on fourth-and-10 from inside the red zone.

Minshew looked to have found Chris Conley a couple of yards from the end zone, but his namesake Gareon batted the ball out of his hands with a diving last-ditch tackle.

They are probably glad they left, as things got from bad to worse for Minshew. He fumbled on a short run on Jacksonville’s next drive, and Zach Cunningham recovered and took it right back into Jags territory.

A disastrous final quarter finished fittingly when Cunningham forced Minshew into a second fumble, collected the ball and ran down the clock to seal a comfortable Texans victory.

Now 6-3, they have put themselves in a strong position to retain the AFC South title, while Jacksonville are playing catch-up at 4-5.