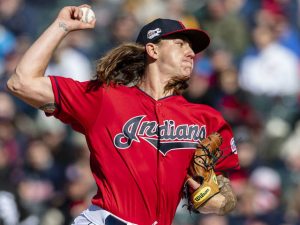 The Cleveland Indians started slowly in the first two-plus months of the 2019 season, digging themselves quite a hole. They were just 28-29 at the end of May.
However, they are 18-9 since June 1, the best record in the American League in that span.
Their latest victory came Tuesday night in Kansas City, where they used a five-run third inning to defeat the Royals 9-5. Trevor Bauer survived a shaky start to pitch six innings of five-run ball and pick up the win.
The Indians will send right-hander Mike Clevinger (1-2, 5.89 ERA) to the mound on Wednesday in the middle game of a three-game series.
Clevinger is 6-0 with a 2.25 ERA in 10 appearances (nine starts) in his career against Kansas City. The six wins are the most he has against any opponent, and the Royals are one of two teams (Los Angeles Angels) against whom he is undefeated with more than one decision.
Check BetRegal.com and find the best online betting site.
Clevinger has started just four games this season because of a pair of injuries. His most recent stint on the injured list was because of a left ankle sprain.
In his latest start, his first since coming off the IL for the second time, he gave up a career-high seven earned runs in 1 2/3 innings against Baltimore. He walked three and served up five hits, including a home run.
The Royals will send left-hander Danny Duffy (3-4, 4.43 ERA) to the mound. Duffy is just 2-10 with a 5.68 ERA in 19 career appearances, including 15 starts, against Cleveland. The 10 losses are tied for the most against any opponent (Detroit Tigers). He has not faced the Indians this season.
Get all the latest Betting and Sport News updates on your social media outlets. Find us on both Facebook and Google+
All three runs Duffy allowed in his last outing, a loss at Toronto on Friday, came in the sixth and seventh innings. He pitched 6 2/3 innings and gave up seven hits and one walk while striking out eight.