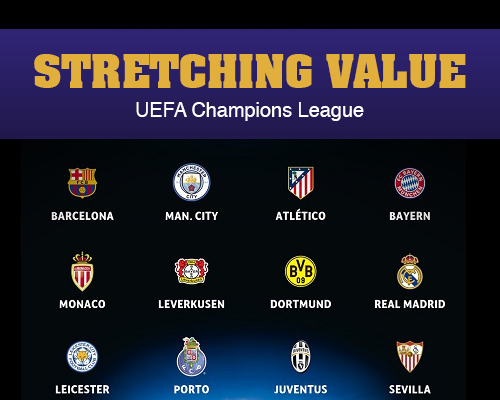 It’s been a long wait and yet it seems like six weeks is way too long for round of 16 but it’s finally back and the first elimination stage is shaping up to be one of absolute quality and it is already stretching value.
It was no surprise to see Barcelona, Bayern Munich and Real Madrid on top at the books, in all likelihood one of those teams will probably win. They are the three best football teams in the world. If you were looking to make a bet on any of the big three, Real is probably the way to go. Bayern is not the same cohesive club we’ve seen in past years and Barça stand on the edge of elimination from Europe after being pummeled by a brilliant PSG side at the Parc des Princes in the first leg of the round.
The hosts dominated the La Liga champions throughout the match, and the sensational scoreline was well-deserved by the Paris club. Angel Di Maria scored twice in a 4-0 victory. He started the avalanche of goals after 18 minutes, finding the goal with a wonderful curling free-kick.
The French giants, who have had their fair share of trouble with Barça in recent editions of the competition, thoroughly outplayed the Spanish club from start to finish to secure the impressive yet mostly unexpected result. Barça’s fabled MSN trio of Messi, Luis Suarez and Neymar were completely neutralized as the Parisians ran riot at home.
This really means Barcelona is likely on its way out of the Champions League. Sure, this team can come back and do the same to PSG in the return leg, but it did nothing on Tuesday to show it could. PSG has to feel great about its chances of advancing.
“There a simple explanation,” Barça manager Luis Enrique said. “Our opponents were superior.”
No team has ever come back from 4-0 down in the aggregate score in Champions League history. Get all the latest Sports Betting updates on your social media outlets. Find us on Facebook!
In the night’s other tie, Benfica stole the victory from BVB after the Bundesliga team dominated most of the match. Mitroglou poked home at the start of the second half, giving the Eagles a precious but undeserved lead.
Dortmund gained a penalty soon after the goal as Ljubomir Fejsa handled the ball, but Pierre-Emerick Aubameyang—who missed several chances—hit his spot-kick straight at goalkeeper Ederson.
Action continues today and we will see out of the big three mentioned above if Madrid and Bayern will be able to sustain their reputation or will stumble like Barça did yesterday. If you’re looking for some outside value, however, it couldn’t hurt to take a peek at teams in the second tier such as Atletico Madrid (+900), Manchester City (+1000) and Juventus (+1100). Anything is possible, of course, but you’re probably stretching for value if you’re looking at any teams beyond Borussia Dortmund at +1200. Sign up now at Betregal.com.

Betting on UFC – Underdogs and Favorites

NASCAR Betting – More Value Than Ever