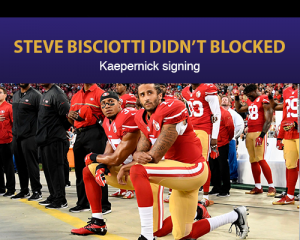 On Wednesday, the general manager from the Baltimore Raven Ozzie Newsome responded to a report from Dianna Russini that stated that he blocked Kaepernick opportunity of signing with the team. The article stated that Ozzie and head coach John Harbaugh had met resistance from the team owner Steve Bisciotti in regard signing the quarterback Colin Kaepernick. The team told the press they are going through a process and haven’t made a decision, also that Biscotti had not told anyone they cannot sign Colin Kaepernick, nor has he blocked the move and pointed the statements are false.

Get all the latest Sports Betting updates on your social media outlets. Find us on Facebook!

The Ravens have made their interest in potentially signing the player, in an effort to gauge the response of all their fanbase. The team already had discussions with Tolin, said team president Dick Cass. The player really wants to play with the team and he’s really committed to football. The director stated they hadn’t made a decision yet one way or the other. The team is trying to take a decision that is the best for the team and balance that with what is best for the fans. Colin is known because he is really fast, had a great arm and is an incredible team player.

With so many different competitions, punters always have some betting material. This makes it easier to find good spots to get our money down. If this makes you feel more confident on getting started, go ahead, sign up at BetRegal.com

No player has been the source of more scrutiny and drama this offseason as Colin had, as the quarterback remains unsigned following a season in which he kneeled during the national anthem in protest of racial inequality and police brutality. This protest caused a debate for many teams between: is Kaepernick unsigned due to a drop in the quality of his play, or is he been punished by NFL teams for taking a political stance before games? Given many of the mediocre quarterbacks who have been signed by the teams this offseason, it’s hard to believe the player is still free.