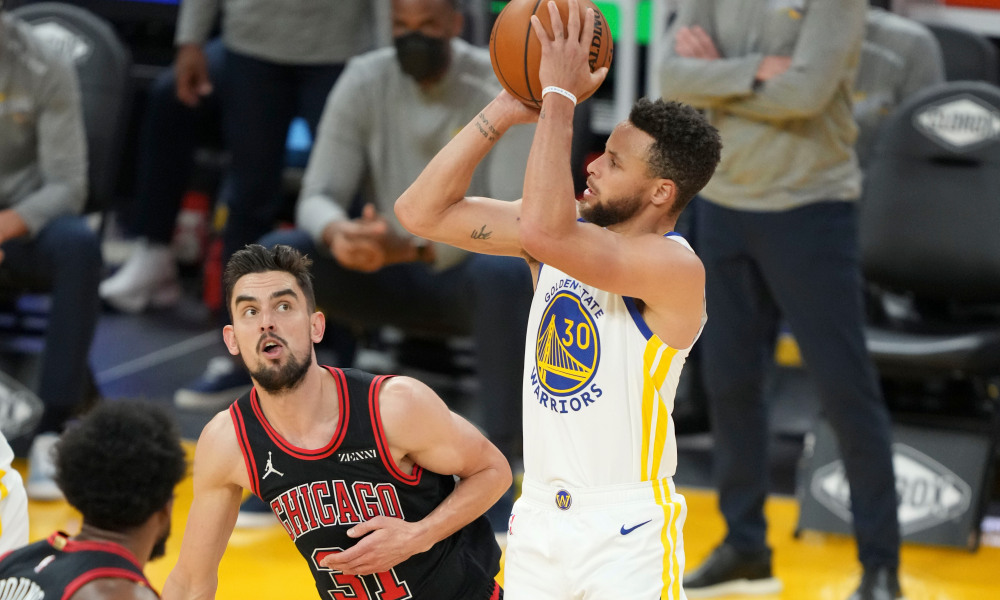 Golden State Warriors star guard Stephen Curry scored 32 points, dished out six assists and grabbed five rebounds in Monday’s 116-102 victory over the Chicago Bulls — making his return from a tailbone injury that much sweeter for a Warriors group that snapped a four-game losing skid.

Curry had been out since March 17 after tripping over a set of risers and falling hard on his tailbone during a 108-94 win at the Houston Rockets. Initially, the Warriors hoped Curry’s injury would keep him out only a few days, but an MRI revealed inflammation in the tailbone and led to uncertainty about exactly when he would be able to return.

Following Sunday’s practice and Monday’s shootaround, Curry felt he could play. However, after he grinded through 30 minutes of action versus the Bulls, it’s clear the injury is something to keep an eye on over the next few weeks.

The 33-year-old didn’t appear to have any issues moving to start the game, but after he fell hard on his backside near the end of the first quarter and then fell several more times over the course of the game, it was evident the injury is still bothering him — a fact he acknowledged following the win.

“I knew it was going to be interesting,” Curry said. “How you can’t really simulate that [with] practice and workouts and stuff, so it wasn’t fun, but got through it. And was able to keep warm and deal with the pain and just play, so it will be something to manage in the near future, but it’ll continue to heal as I get some more time.”

Several times after Curry came out of the game, a member of the Warriors’ staff walked over to him to place a heating pad around his tailbone.

Curry stood up much longer than usual to try to keep everything loose, but when he finally did take a seat, a staff member would bring out a large, black pad for him to sit on.

The two-time MVP understands that this injury is going to linger for a while, and he did his best to keep himself upright and not allow his momentum to carry his body to the floor, like he typically would. Asked what changes the most for him because of the tailbone discomfort, Curry, who still managed to take a charge in the third quarter, was quick with an answer.

“Just dealing with pain,” Curry said. “That’s it. Try to turn it off and just focus on the game. The charge I took was probably — it was a good play. I tried to brace myself. That’s the one that you don’t want to second-guess moves or decisions on either end of the floor because you’re trying to avoid pain. You kind of just have to deal with it, so that was my mindset coming back.”

As happy as the Warriors are to get Curry back, his presence also comes with an uneasiness given the tricky nature of his injury. The Warriors are hopeful Curry will eventually be able to play pain-free, but nobody is quite sure when the tailbone discomfort will go away. “Because it’s such an unorthodox type of fall,” Curry said. “Landing on that stair like I did, probably not any time soon, but I should be good and keep playing.”