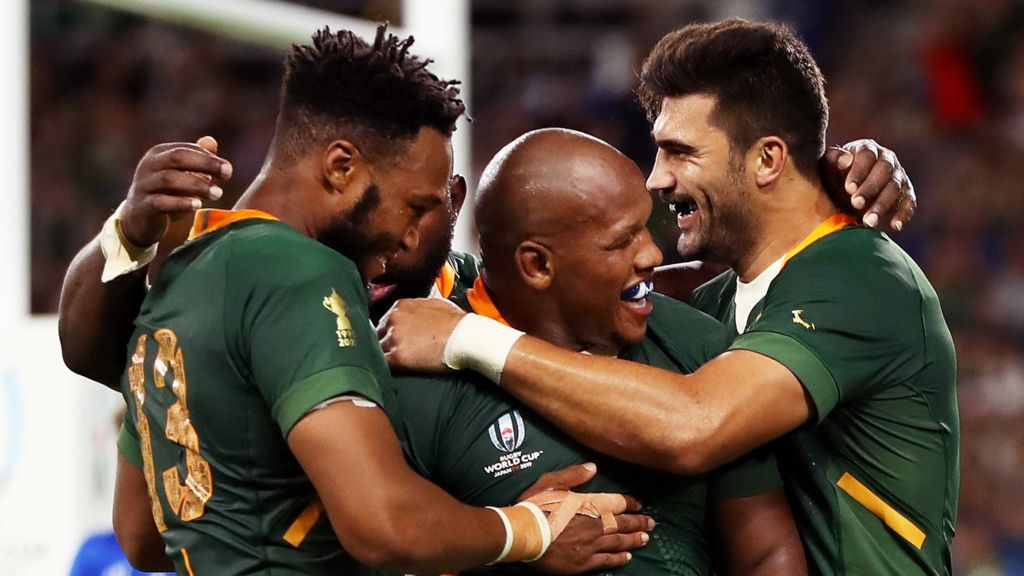 South Africa look to have protected a second place finish in Pool B with a leading victory over Canada in Kobe.

Northampton Saints’ Cobus Reinach ran the show in the first half, recording an opening half hat-trick to help clinch all the points for the Boks before the first half was close to its conclusion.

In the first half, South Africa were dominant throughout. After just two minutes, Damian de Allende crossed the try-line to register the opening score. Starting from an energetic RG Snyman burst, Elton Jantjies converted to keep the scoreline ticking over.

Just a couple of minutes later, South Africa augmented their lead again. This time it was S’busio Nkosi with the five point effort, hugging the left touchline after receiving Kwagga Smith’s offload. Jantjies was incapable to convert this score, but that miss would only be a momentary blip on his radar.

The Lions flyhalf converted each of Cobus Reinach’s three first half tries.

The Northampton Saints star opened his account in superb fashion, drifting past the Canadian defensive line before collecting his own chip to dive over.

He then latched onto the ball after yet another Snyman break to keep the foot on Canada’s throat and he concluded his hat-trick after Jantjies’ cross-field kick to Warrant Gelant found its way to De Allende and then the mercurial scrum-half.

Canada started the second half extremely well despite only having 14 men on the field. Consistently good carries in the South African 22 led to former Darlington flanker Matt Heaton driving the ball over low to score his first ever try for Canada. Peter Nelson converted.

It was only a momentary lapse of concentration from South Africa, though. Getting the ball back in their possession, quick ball got South Africa over the try line again. 38-year-old Schalk Brits received the ball some 10 meters out and stepped his way over the tryline, giving Jantjies another two points from the tee.

South Africa continued their dominance in the scrum and marked this with another try. Going through the hands of their backs after another well-executed set piece, Damian Willamse dived over the line before looking to the heavens after his late call-up. Jantjies converted to put the South African’s over 60 points.

But the Boks weren’t done there. Frans Malherbe prolonged his arm over to register another South African try. This time Jantjies could not convert, but there was still some time to go. Unfortunately neither side would extend their individual scores, with the game finishing 66-7.