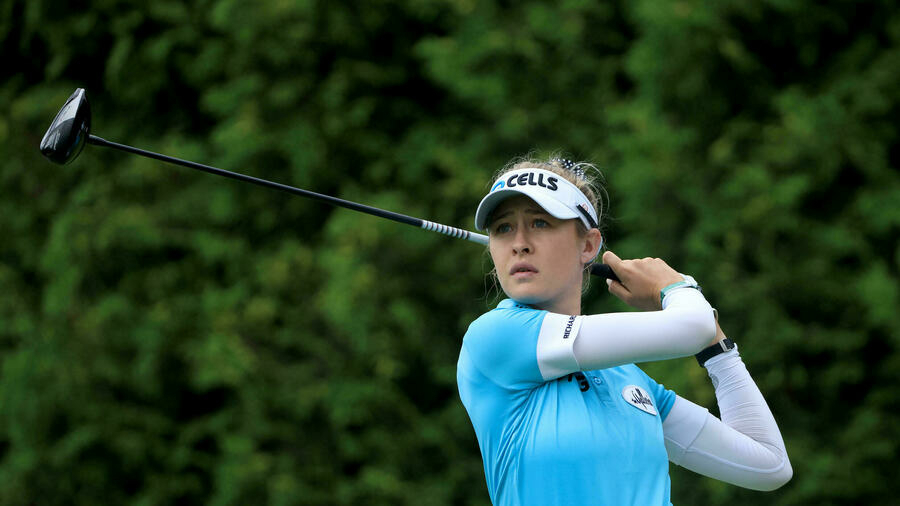 World No. 1 Nelly Korda made a poor start to her bid for a second major title when she posted a 3-over 74 in her opening round at the Evian Championship on Thursday.

The 22-year-old American, who won the KPMG Women’s PGA Championship last month to move to No. 1, had five bogeys and made only her second birdie on the 17th hole.

Korda is a six-time LPGA winner and the first American at No. 1 in the women’s world ranking since Stacy Lewis in 2014.

The major-chaser comes from a major sporting family.

Her older sister, Jessica, was also playing at Evian on Thursday.

Younger brother Sebastian is among the best young players on the ATP tennis circuit and ranked 47th.

Their father is Czech Petr Korda, a previous No. 2-ranked tennis player who won the Australian Open in 1998.

Their mother, Regina Rajchrtova, also played professional tennis, competing for then-Czechoslovakia at the 1988 Olympic Games and twice reaching the fourth round of the U.S. Open.

Ko is ranked No. 2 after losing the top spot to Korda, who won the Volunteers of America Classic three weeks ago for her first victory this year on the LPGA Tour and eighth overall on the LPGA.

She won at Evian in 2019 and the event was cancelled last year amid the coronavirus pandemic.

“I have seen my picture everywhere, so I was thinking ‘Wow, that was just two years ago but feels like it was five years ago,'” said Ko, who won her first major earlier in 2019 at the ANA Inspiration.

She teed off shortly after 8 a.m. along with former champions Anna Nordqvist (2017) and Angela Stanford (2018).

Seven-time major winner Inbee Park was also in action. The third-ranked Park is chasing the only major she has not won. She won Evian in 2012, but that was the year before it became a major and Park has not placed higher than eighth since it gained that status.

The picturesque Evian Resort Golf Club, with its idyllic setting, is a big favorite among players, with the total prize money $4,500,000 US.