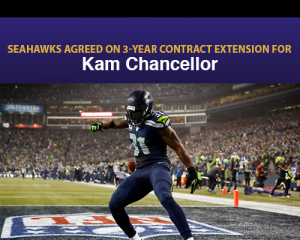 Last Tuesday, the Seattle Seahawks reached an agreement with Kam Chancellor. The team will pay the defender $36 million over as they agreed on a 3-year contract extension. The deal includes $25 million in guaranteed money. The 29-year-old player had been set to enter the final year of his contract this year, but the new agreement will locked him up to the 2020 campaign. The contract squabble between the important franchise and its most impactful player.
Get all the latest Sports Betting updates on your social media outlets. Find us on Facebook!
Chancellor wanted a new contract back in 2015 season, but Seattle wouldn’t budge it, it resulted in an extension holdout that lasted the training camp and the regular season. After that season, the general manager John Schneider praised the defensive back’s effort. The player took care of his body and was on point the minute he passed through the door. Back in 2015, he racked up 74 combined tackles, four passes defended, a forced fumble and two interceptions in 11 games, adding nine more tackles in the two playoffs. He placed himself as No. 18 in the league. The player had a solid showing, even though he came into the season without the practice reps.
With so many different competitions, punters always have some betting material. This makes it easier to find good spots to get our money down. If this makes you feel more confident on getting started, go ahead, sign up at BetRegal.com
In 2016, Chancellor racked up 85 tackles, eight passes, a forced fumble and two interceptions across 12 games. He ranked No. 34 overall players in the NFL for the impacted he had on the Seahawks defense. It seemed that the Seahawks didn’t wanted to give the power to the players and its negotiations, as they didn’t gave into the player’s demands so soon after the prior agreement. Chancellor will assume his spot in the secondary alongside Earl Thomas. Both player have become perfect complements to each other, and they are part of the success of the Seahawks in recent years.