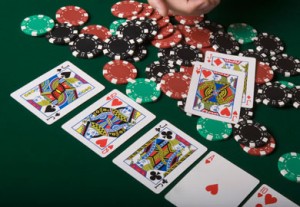 Check Regal Poker for Latest Poker News, tips and more.
Dutch pro Ruben Visser (GPI#1133) made sure that the Main Event title at the Master Classics of Poker would stay home for a second straight year (Noah Boeken won in 2013) as Visser won his first event in 20 months on the circuit over the weekend.
After a long, grueling day, and with the casino getting ready to close, Ruben Visser beat 2011 Master Classics of Poker Main Event winner David Boyaciyan to prevent the latter from becoming the first two-time champion in the event’s history.
With just 35 minutes left before the casino would be forced to close for the night and the remaining players left to return for an additional fifth day of action, Visser sealed the deal after just to hands of heads-up play. At the time, both players were virtually even in chips with 55 big blinds, but it was over in the blink of an eye. Visser won a big four-bet pot on the first hand before finishing off his compatriot on the next hand.
Regal Poker is the Poker Online website, visit us and check out our promotions we offer you the best online poker bonus.
Each of the 10 players at the final table was guaranteed €15,341, but all were eying the larger piece of the top prize.
The day began with Clyde Tjauw Foe leading the chip counts, among the remaining twelve players; however, he slipped down and ended at 4th place.
The action began almost instantly, as the very first hand saw last year’s champion Noah Boeken, being busted for 12th place. The Dutchman fell, when his pocket tens, ran into Ole Schemion’s pocket queens.
The misfortune of being bubble boy fell upon Britisher Stuart Rutter’s shoulders, as his ace eight were felled by the superior king queen pair of Jussi Nevanlinna.
The official ten-handed final table now began and David Yan was the first to hit the rails, with his ace queen stymied by Boyaciyan’s king pair.
Ultimate winner Visser caused the next elimination, sending Hzarem Aanquich at 9th place.
Steven van Zadelhoff, another Dutchman was then busted at 8th place, reeling from Boyaciyan’s pocket aces.
Schemion, who had won the MCOP in 2012, was unable to fend off Visser and exited at 7th place.
Robbie Hendriks, a recreational player, managed to make it to 6th place, despite a short stack. His ace two were no match for Andrew Chen’s ace pair.
Nevanlinna with ace king faced Foe’s ace ten, unfortunately, the board added a ten to Foe’s lot and Nevanlinna was out at 5th place.
Four-handed play went on for two and a half hours, until Visser emerged in a crucial hand to take a huge flip from Foe. A badly wounded Foe hit the rails just a couple of hands after the blow.
The three remaining players then struck a deal, where Visser would take home €200,000, Chen €190,000 and Boyaciyan €178,000, leaving an additional €25,000 for the winner.
The deal did nothing to reduce the intensity of the game, though.
Chen suffered a bad beat and was the first to be eliminated.
Though Boyaciyan was keen to get his second MCOP trophy, it was not to be, as Visser beat him just two hands later.
Looking for best online poker game website? Follow us and check out our promotions we offer
Final Table Results

Poker strategy: Tips For Playing Out Of the Blinds