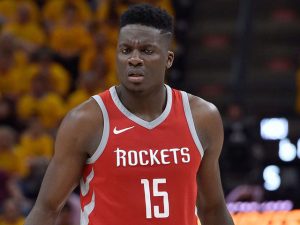 Houston Rockets center Clint Capela reportedly will miss four to six weeks with a thumb injury suffered Sunday against the Orlando Magic, according to Adrian Wojnarowski of ESPN.
Wojnarowski added that an MRI revealed ligament damage. Jonathan Feigen of the Houston Chronicle reported earlier that Capela would miss Houston’s game Monday against the Memphis Grizzlies.
The 24-year-old picked up the injury in the third quarter of the contest but did not miss any game time.
“As I was going up for the lob, I got hit in the hand,” Capela said after the game. “We’re going to see what it is when we go back home. It’s just sore right now. We can’t really see anything [on the X-ray] yet. We’ll see what happens.”
Capela has settled in nicely as Houston’s starting center when healthy, averaging 17.6 points, 12.6 rebounds and 1.8 blocks per game this season.
He’s given the explosive Houston offense a steady rebounder and solid rim protector, which is a must for a team that has more talent on the offensive side of the ball than on defense.
Check BetRegal.com and find the best online betting site.
The injury is a disappointing development for the big man, who missed a month of action in the 2016-17 season after fracturing his left fibula in mid-December of that campaign but has largely remained healthy since.
After being selected with the 25th overall pick by the Rockets in the 2014 NBA draft, he rarely saw the court in his rookie season.
He saw more time in his sophomore campaign, largely off the bench, but 2016-17 was his breakout campaign. Last year he continued to grow as a true difference-maker on a contending Rockets team, earning a five-year, $90 million contract in the process.
Get all the latest Betting and Sport News updates on your social media outlets. Find us on both Facebook and Google+
It’s unclear how the Rockets will replace his impact at center, though Nene will step into the starting gig and players like Gary Clark and Marquese Chriss should see more minutes.