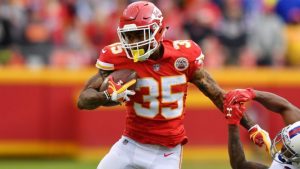 The former Chiefs running back rejoined his former team Monday in the wake of Kareem Hunt’s release on Friday.
Coach Andy Reid, speaking before the signing of West during his weekly Monday teleconference, indicated a move was in the works.
“(General manager) Brett (Veach)‘s got a list of guys that he was bringing in,” Reid said. “Not sure who all showed up. I’ve been in lockdown up here, but he was going to look at a couple guys.”
West, who was released by the Chiefs during training camp, was briefly picked up by the New York Jets. But he was released by that team less than a week later. West was cut by the Chiefs in part because of the emergence of Damien Williams during camp and the projected health of Spencer Ware as the running back returned from a knee injury that kept him out of the 2017 season. By releasing West, the Chiefs gained $1.65 million in salary cap space. The details of his new contract aren’t yet known.
Check BetRegal.net and find the best sport news.
West, who missed most of training camp because of a concussion, led the Chiefs with 634 rushing yards in 2015 after Jamaal Charles tore his ACL in Week 5. Afterward, West and Ware signed extensions with the team through the 2018 season.
West was one of two running backs the Chiefs reportedly brought in for workouts on Monday to fill Hunt’s roster spot. Former Broncos and Panthers running back CJ Anderson also took a visit, but according to ESPN’s Josina Anderson, the Chiefs chose to sign West over Anderson because of West’s familiarity with Kansas City’s system and playbook and ability to play special teams.
Get all the latest Betting and Sport News updates on your social media outlets. Find us on both Facebook and Google+
In 49 NFL games, all with Kansas City, West has rushed for seven touchdowns and 999 yards. He has averaged 3.8 yards per carry.

Warriors Damian Jones to have surgery on pec, likely out for season