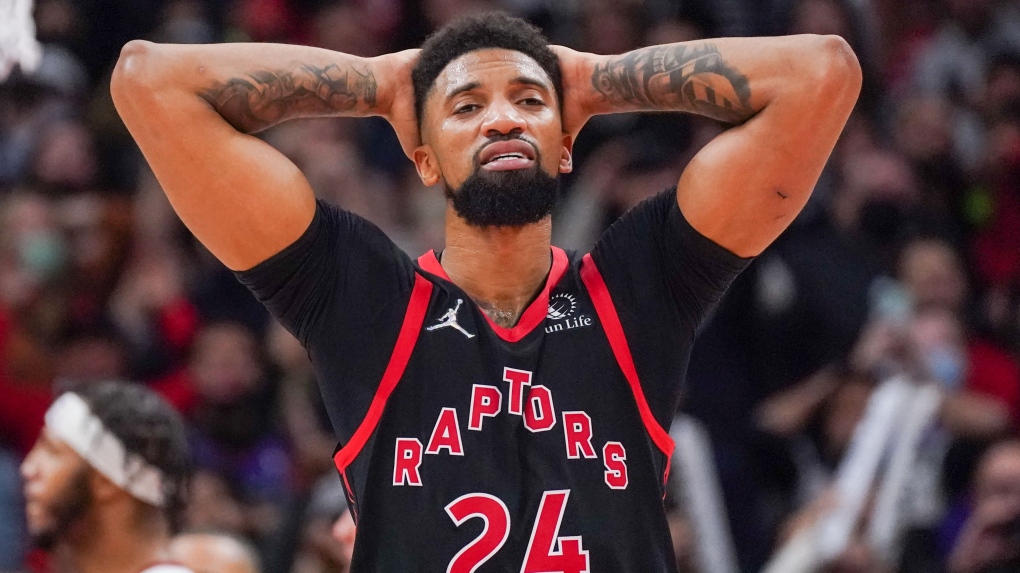 The NBA has postponed Toronto’s match at Chicago tonight because the Raptors do not have the required eight players available.

The announcement from the NBA comes a day after the Raptors added four players to the league’s COVID-19 protocols, giving them a total of seven players sidelined for novel coronavirus reasons.

A Raptors spokesperson confirmed Wednesday that forward OG Anunoby has become the eighth player on the team to enter the league’s COVID-19 protocols. Anunoby had just returned from a left hip pointer that kept him out of 13 games.

The Raptors attempted to make up the numbers by signing several players from the G-League under the NBA’s hardship clause.

Nik Stauskas of Mississauga, Ont., Brandon Goodwin, Juwan Morgan, and Tremont Waters have been signed by the Raptors from the G-League under the NBA’s hardship clause.

It’s the third game the Raptors have had postponed, along with Monday’s home game against Orlando and a home date with the Bulls on Dec. 13.

The Brooklyn Nets’ game versus the Portland Trail Blazers on Thursday has been postponed because the Nets do not have the required number of players, the NBA said on Wednesday, amid a rise in COVID-19 cases.

The NBA said on its website that the Nets had 10 players in health and safety protocols as of Tuesday.

“The Nets do not have the league-required eight available players to proceed with the game against the Trail Blazers,” the NBA said in a statement. The game was programmed to be played in Portland. Despite a surge in COVID-19 cases, NBA Commissioner Adam Silver has said the league has no plans to pause its season.