Rams LB Kiser to have surgery for pectoral injury 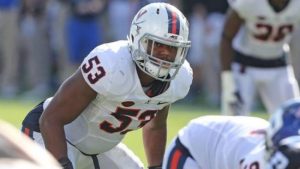 Los Angeles Rams linebacker Micah Kiser will undergo surgery on Tuesday for a pectoral injury, a Rams spokesperson said. No timeline has been determined for his return.
Kiser suffered the injury on Saturday in a preseason loss to the Dallas Cowboys at Aloha Stadium in Honolulu.
A second-year pro, Kiser was a projected starter at inside linebacker alongside Cory Littleton. Fifth-year pro Bryce Hager, who has contributed mostly on special teams the last four seasons, is now expected to fill the role.
“He’s capable of being a starting player in this league,” Rams coach Sean McVay said about Hager, before the results of Kiser’s MRI were announced. “He’s definitely demonstrated that when given the opportunity, he’s capitalized on those chances.”
In four seasons, Hager has three pass deflections, a forced fumble and a fumble recovery.
Check BetRegal.com and find the best online betting site.
McVay has opted to sit most of his starters throughout the preseason because of the potential for injuries. He even went so far as to leave about 20 starters in Los Angeles, rather than travel them to Hawaii, to avoid too much preseason travel. But Kiser, a first-year starter, and defensive tackle Sebastian Joseph Day, also a projected first-year starter, have participated in preseason games due to their lack of experience and to solidify their roles as starters.
“The reason that we thought it was important for those guys to play is because they are still younger guys that haven’t had the accumulation of work,” McVay said. “Unfortunately, whether it is in preseason games or regular season, even in practice, sometimes these injuries are inevitable and you can’t always avoid it.”
Second-year pro Travin Howard, rookie Dakota Allen and undrafted free agent Natrez Patrick remain as backups at inside linebacker.
Get all the latest Betting and Sport News updates on your social media outlets. Find us on both Facebook and Google+
A fifth-round pick in the 2018 NFL Draft, Kiser collected four total tackles while playing in all 16 games during his rookie season. He was slated to start at the other inside linebacker spot opposite Corey Littleton based on the team’s unofficial depth chart released earlier this month.