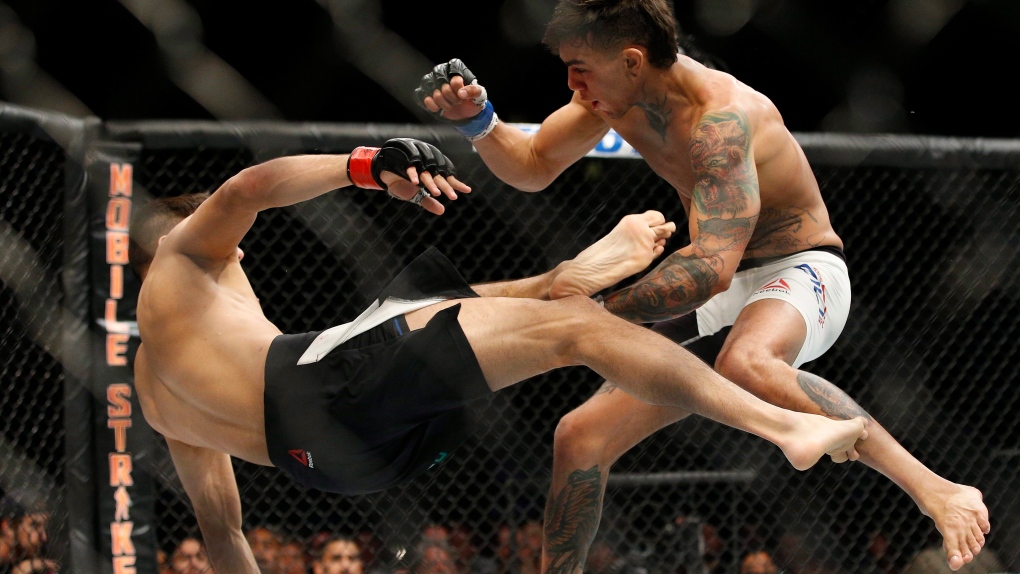 It seemed early in Andre Fili’s fight with Charles Jourdain that it might only be a matter of time before someone caught the other with a highlight-reel ending.

The featherweight bout was part of the UFC on ESPN 10 main card at the UFC Apex in Las Vegas.  Jourdain kicked to the body early, then tried to push forward. But Fili stung him with a right hand and came back with a left hook a few seconds later. Jourdain kept kicking to the body, then tried to go up high, but Fili worked his way through them. Fili kicked high, himself, a minute in. They traded high kicks, then continued to land on each other to the body. Midway through the round, when Jourdain kept coming hard with the kicks, Fili drilled him with one when he spun around. A knee landed a minutes later.

But with 90 seconds left, Jourdain drilled Fili with a left hand and sent him crashing to the canvas. He went after him, but Fili recovered and was back to his feet relatively quickly, where Jourdain kept after him with another body kick. They swung for the fences inside the final 20 seconds, and Fili grabbed Jourdain and picked him up for a slam. The two jaw-jacked at each other before going back to their corners.

The second round was more of the same with plenty of kick exchanges – each out of both stances.

Most times Jourdain kicked to Fili’s body, Fili returned fire with kicks up high. With two minutes left, Jourdain tried a spinning back fist that caught Fili flush, but didn’t put him down. The back-and-forth striking battle continued, but with 30 seconds Fili landed a takedown that may have been a difference-maker in a close round to score. Fili landed a high kick early in the final round that nearly took Jourdain off his feet. Seconds later, he had to dip away from a spinning attack from Jourdain. Fili kept the pressure on, but after ducking past a jumping knee from Jourdain, he took him to the canvas for this third takedown – one in each round.

Jourdain’s striking slowed down late after he got back to his feet. He was able to defend against another Fili takedown attempt with 45 seconds left, but not long after Fili took him down again to seemingly seal the deal.