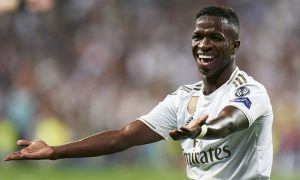 Real Madrid winger Vinicius junior faced difficulties in getting regular play time at Bernabeu this season and reports in Sports that Paris St Germain wanted to add the young to his Brazilian contingent within the club.

The sports director of PSG Leonardo is increasingly concerned that his team will no longer be able to keep its valuable assets Neymar and Kylian Mbappe that have been linked to moves in Barcelona and Real, respectively, and he is now contemplating contingencies if the couple leaves the Parc des Princes.

The Parisians have so far managed to keep hold of their star duo, but that is likely to change in the near future with Neymar in particular set to move on at the end of the season.

The Brazilian is still angling for a come back to Barcelona after seeing a move collapse at the end of the last transfer window, and PSG are likely to grant him his wish of a move away in the summer of 2020.

Vinicius would now be at the top of the list of backup options, the report saying that the former Flamengo man could be tempted to move after being ousted on the Real side by his compatriot Rodrygo.

The dialogue between the two clubs is already open, Real continues his discussions on the possibility of turning the goalkeeper Alphonse Areola is asking for a loan.

Arsenal and Milan are among the clubs interested in the Brazilian, while Paris Saint-Germain repeatedly asked for him to be included in a theoretical player swap deal last summer with Neymar.

The 19-year-old had enjoyed an excellent debut campaign in the Spanish capital, with four goals in 19 starts in all competitions in 2018-19.

Get all the latest Betting and Sport News updates on your social media outlet. Find us on Twitter
Vinicius is said to have no interest in any sort of exit from Los Blancos soon.