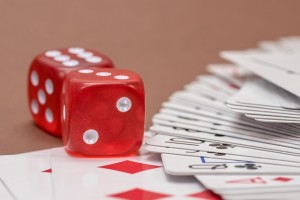 Check Regal Poker for Latest Poker News, poker strategy tips and more.
Basically, suited connectors are cards which link together and they are very useful to have in your hand. A connector would be something like a 7-8, but a suited connector would be a 7 of clubs and an 8 of clubs (because they both belong to the same suit). Bear in mind that suited connectors are pretty rare, but lucky to stumble across.
Learn everything that you need to know about how to play poker, and become a professional in Blackjack and Texas Hold’em
But even if two of your cards are not directly linked to each other – maybe you hold a 9 and a jack – we would say that they are still worth holding on to. Why? Well, if the right cards appear in the flop, you still have the chance to make a straight (a run of cards of any suit) or even a flush (a run of cards in the same suit).
Suited connectors can also help you achieve a flush draw. Let us explain what a flush draw is. Say you have a suited connector in your hand (like A♣ and 2♣), then in the flop a 3♣-4♣-x appears. You are said to be in a flush draw. You simply need one desired card (which would be any ♣) to be drawn to make a flush. Of course, poker is unpredictable and you may not get the card you so desperately need on the turn and the river. And if you don’t, sadly this is called a busted flush.
An open-ended straight flush draw puts you in an even better situation than a flush draw. Okay, so let’s imagine you have two suited connectors (a 7♣-8♣ for instance), and the flop comes down revealing a 5♣-6♣-K♣. What does that give you?
Looking for best online poker game website? Follow us and check out our promotions we offer you  the best online poker bonus.
It gives you a run of 5-6 from the flop, plus 7-8 from your own hand. It’s called an open-ended draw because you only need one more card on either end to make a straight. In this case, all you need is for a 4 or a 9 to turn up and you’ll make a straight. So overall, you are actually doubling your chances of winning, which is pretty good.
Open-ended straights like this are quite rare and most of the time you’ll only have one end to form your run from. Let’s just say you had A-2 in your hand, then the flop comes and reads 3-4-J. What will you end up with? You’ll have A-2-3-4 so you can only use a 5 to make a straight.
So what would the perfect situation for a suited connector be? If you held a 7♣-8♣ and a 5♣-6♣-King♣ turned up in the flop then you’re in an excellent position because not only would you have an open-ended straight draw, but you would also have a flush draw. You would be so fortunate if you ended up with these cards since it massively increases your chance of hitting a good hand. But how?
Well, because not only are there eight cards in the deck that would give you a straight (four 4s and four 9s) but there are also nine cards in the deck which would give you a flush (13 spades minus the 2 in your hand and the 2 in the flop). In all, they’ll give you a 54% chance of hitting your hand. Those odds are pretty good, wouldn’t you say?