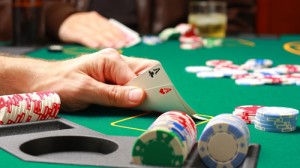 Check Regal Poker for Latest Poker News, poker strategy tips and more.
Most tells come from body and arm movements. Even the players with five pounds of stuff on their head often give away a boat load of information with the rest of their body. Chip action, talking, timing, posture and hand or arm movements are all much more reliable indicators than facial ticks.
The most universal set of tells come from the way players interact with their chips. No one can sit totally still and still manage to get their chips in the pot. Pay attention to how your opponents bet and you’ll be able to gather some powerful information. Do they throw the chips in with force or do they gently slide them in? Typically, players who fire their chips in with all they’ve got, don’t want you to call and are trying to intimidate you.
Regal Poker is the Poker Online website, visit us and check out our promotions we offer you the best online poker bonus.
On the other hand if they ease them into the pot it generally means that they don’t want to scare you off. Along the same lines, occasionally you’ll have players slam their chips down right in front of you as if they are daring you to call. Is there any reason why they’d act so forceful if they had a strong hand? If you’ve got anything at all, put your chips in and take down the pot.
Another question to ask yourself is “what are my opponents doing with their chips when the action is not on them?” Many players are constantly riffling their chips and the speed at which they’re riffling can tell you something about their hand. If your opponent’s chips are moving at a furious agitated pace it usually means that they’re nervous about the strength of their hand. But, if they are moving their chips in a slower, more relaxed manner, typically they feel more relaxed about their chances of dragging the pot.
Another way players can cue you in to the fact that they’re relaxed and like their hand is by talking. When most players are bluffing they sit as still and as quietly as possible, because they don’t want to give you any reason to call. Whether they’re telling you to that they got there on the river, telling you to get your money in the pot, or spouting off their favorite muffin recipe; if they’re talking it probably means they like their hand. Of course if you’re up against someone who’s constantly running their mouth from the instant their rear hits the chair, then talking during a hand isn’t going tell you much about their hand.

Looking for best online poker game website? Follow us and check out our promotions we offer you the best online poker bonus.
Apparent disinterest is also a major cue that you could be in trouble. If you’re deciding whether or not to call on the end and you find your opponent staring up at the ceiling or off into the distance as if they’re day dreaming, run for the hills. Their main goal this spot is to not look intimidating. If it looks like they don’t care, beware.
One specific tell which can be a little counterintuitive is if you find an opponent’s hand visibly shaking while they are putting out their chips. Your first thought might be that hand shaking equals nervous equals bluffing, but in fact it usually means they have a big hand. While it might seem a little odd to be nervous with a big hand that’s very likely to win the pot, the shaking comes from a mixture of excitement and the terror of potentially screwing up a virtual sure thing. You can expect to find this tell when you’re up against someone who just sat down in a game that is way over their head or at the beginning of a no limit tournament. After an hour or two almost everyone settles down and it’s not very scary to fold hand after hand. But, right at the beginning of a tournament or when taking a shot at a big game, the idea of getting dealt a hand that you couldn’t possibly get away from means there’s a chance you could go broke or blow off a good chunk of money.
Posture and timing are two other important indicators. Pay attention to how your opponents are sitting and how long it takes them to check, bet or raise. When they have a good hand do they sit forward and bet right away? Or do they lean back in a nonchalant manner and take their time? Most players will exhibit some pattern in their actions. Even the most dedicated players have trouble paying attention to what they’re doing with their body after they’ve been playing for 5 or 6 hours. If you play with the same players regularly it’s even more important to pay attention to these patterns.
One of the more rare but most reliable tells is “If there’s food in their mouth, watch out!” In card rooms and casinos where players can get food at the table, even the loosest players tend to be more patient when their food arrives. The game takes a second fiddle to whatever they are eating and while they’ll still play their good hands, rarely if ever will someone run a complex bluff or gamble with a marginal hand. If a player is betting and raising while they’re eating give them credit for a good hand.
Tells aren’t the end all and be all of poker, and there will be occasions when the same action will mean different things for different players. But if you can pick up on other player’s tells it can be a significant piece in playing winning poker. The most important thing is to focus and pay attention, even when you’re not in the hand, because an opponent giving off information with a tell won’t be worth anything to you if you don’t know what you’re seeing. Having the courage to act on the information you’ve gathered is another key ingredient. It doesn’t matter how many tells you pick up if you don’t put them to good use. Oh, and if you do find a guy who’s eyebrows start dancing whenever he has the nuts, send him over to my game.
Get all the latest PokerNews updates on your social media outlets. Follow us on Twitter and find us on both Facebook and Google+!

All About Online Blackjack