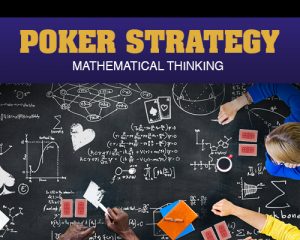 Poker is a game of skill more than it is a game of luck, have you heard this before? And when it comes to skill and strategy mathematics is key. And talk about what’s in the air, you may have heard of this one as Bill Gates recently put it on his list of five books you should read this summer, How Not To Be Wrong: The Power of Mathematical Thinking by Jordan Ellenberg.
He was a brilliant mathematician in charge of a little-known part of the U.S. military during World War II, the Statistical Research Group. As its name implies, the group was tasked with figuring out the answers to computationally complex military questions, such as optimal sampling inspection protocols for rocket propellants.
Here’s one of the problems the group was asked to solve: What’s the best way to armor planes? You can’t apply huge amounts of armor everywhere, or the plane gets so heavy that its speed, maneuverability, and range all suffer. But too little armor, and it can’t survive hits from anti-aircraft guns or enemy fighters.
Wald’s group was told that planes coming back from engagements over Europe had 1.11 bullet holes per square foot over the engine, and 1.73 over the fuselage. Should they rearrange the armor? If so, how?
At first glance, you’d think you should put less armor on the engine and more on the fuselage, because the latter is taking more hits. But Wald realized that the key to the answer was in the data they didn’t have. The planes returning safely from their sorties were not a representative sample. The crucial missing data pertained to the planes that didn’t come back.
The greater density of bullet holes in the fuselage of the survivors meant that the planes could take those hits and still fly home. But the planes that were getting shot in the engine were falling out of the sky. The solution to the problem, then, is to move armor from the fuselage to the engine a counterintuitive result, if you only looked at the available numbers.
Missing data can mislead you in poker, too. Let’s consider how this can happen.
Win Rates
You look at your log book or spreadsheet of buy-ins, wins, and losses, and see a decent profit. Great! You’re a winning player overall! However, have you faithfully recorded every single dollar, in and out, 100% of the time? For most poker players, the answer is no.
If the missing data were random, it wouldn’t matter much; the bottom-line conclusion would remain the same. But that’s not how it tends to happen.
Rather, the missing results tend to be the ones we want to forget, so we find poor excuses for not including them. That session “doesn’t count” because I was too drunk to play well, or it was just a home game rather than a casino, or I was playing a poker variant that was new to me. There’s no end to the creative justifications we can concoct when we want to avoid a harsh truth.
But even if you have honestly documented all of your results, you still might be misled by missing data. Sure, you have a good net win. But how are you getting it? Maybe you’re winning at Holdem, but losing at Omaha. Maybe you’re winning at $1/$2 games, but losing at $2/$5 games, or at least winning less per hour. Maybe you do great with shorter sessions — less than four hours, say — but tend to turn loser when you stretch that out. How are you doing live versus online? Cash games versus tournaments?
How can you possibly know any of these things if such details are not incorporated into your record-keeping? How can you optimize your hourly win rate if you don’t have the data to figure out when and where you’re performing best? How can you plug leaks in your game selection if you can’t sort your data by many different criteria?
Learn more about strategy, play now at http://www.regalpoker.com