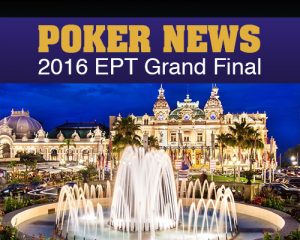 Find your daily dose of articles with the latest poker news!
On the Latest Poker News, Day 2 of the 2016 PokerStars and Monte-Carlo® Casino EPT Grand Final €25,750 High Roller finished with 12 players left in the field and Ofer Zvi Stern in the lead.
Before play on Day 2, another 11 entries were tallied, including four hopefuls that won entry to the tournament in last night’s hyper-turbo satellite. With 231 entries in total, a new record attendance for this event was set and a prize pool of over €5.65 million was created. The top 31 spots are guaranteed at least €49,800, with €1.197 million awaiting the champion.
Among those that will be returning to the tables of the Salles des Etoiles were €100,000 Super High Roller champion Ole Schemion, Bryn Kenney, Igor Kurganov, John Juanda, Tobias Reinkemeier, and PokerStars team pros Jason Mercier and Liv Boeree. But unfortunately for those players, all of them joined the rail within the first hour.
Joining the rail as an eliminated player was Mike McDonald, who failed to earn any points for towards EPT Player of the Year and close the gap he’s behind Steve O’Dwyer.
After six 60-minute levels, only 36 hopefuls headed to the dinner break with 2015 World Series of Poker November Nine member Stern in the lead.
After dinner, David Yan shoved into Imad Derwiche with a busted straight and flush draw and the runner-up of this event last year called with a set of jacks to leave Yan with dust. Ben Heath lost a flip with ace-king to queens, and 2014 WSOP Main Event champion Martin Jacobson could not get there with ace-nine versus Derwiche’s pocket sevens.
Stuer and Byron Kaverman were eliminated in the last level of the night and 12 players bagged up chips. Stern was in the lead after claiming 1.638 million, and we was followed by Max Silver on 1.342 million. Alexandros “mexican222” Kolonias (1.338 million), Papazian (1.231 million), Ivan Deyra(1.16 million), and Rafael Da Silva Moraes (1.026 million) are the others with seven-figure chip counts.
Last year’s runner-up Derwiche was still in contention as well, and he’ll look to finish one spot better this time around. He bagged up 840,000.

Don’t miss our special articles about Texas Hold’em and blackjack,
Become the best player that you can be!