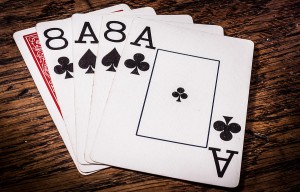 Check Regal Poker for Latest Poker News, tips and more.
Two pair – Aces and Eights. Known as the Dead man’s hand, Ace-8 is what “Wild Bill” Hickok was holding when he was shot and killed by Jack McCall at a poker game in 1876 in Deadwood, a city in South Dakota. Poker was prevalent in the 1800s in America where it spread like a wild fire in the mining towns. One of the favorite pastimes of Hickok was playing poker at local saloons, he was in South Dakota at the time working as a gold prospector.
No one knows for sure what the kicker was, but from then on black aces and eight’s has been called dead man’s hand.
Regal Poker is the best online poker game website, visit us and check out our promotions we offer you the best online poker bonus.
Often, poker players will refer to any hand with aces and eights as a dead man’s hand, but the term originates with five-card stud. A true dead man’s hand consists of five cards, but the fifth and final card is inconsequential.
Due to its negative associations, novice players and those that don’t play might expect the dead man’s hand to be a playing hand of low value. That isn’t the case, however, and the hand is actually quite good and often a winner.
Get all the latest PokerNews updates on your social media outlets. Follow us on Twitter and find us on both Facebook and Google+!