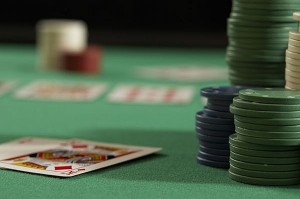 Check Regal Poker for Latest Poker News, tips and more .
* In community card poker games, such as Hold’em and Omaha, cards you hold that would be outs for your opponents.
* One of your opponent’s outs. A card not in play because it is in a hand and therefore is not live in the deck.
The term blocker is normally intended for a player who, in a game of community card poker, is holding one of the outs of an opponent. In community card poker, players are dealt an incomplete hand. A certain set of cards, called community cards, are placed facing up, in the center of the table. Players can use these cards, in any combination, to complete their hands. Applicable in draw poker only, players may discard their blocker cards for others to pick up.
A blocker comes into play when a straight or a straight draw comes into the equation. The cards(s) that an opponent requires to complete his hand for a straight or straight draw (commonly referred to as “Outs”) may be held by another player who, in such a scenario, prevents the former from completing her/his hand, thus “blocking” their chance of winning the round.
There is another definition of a blocker, which refers to having a combination of cards. For e.g. if the cards on the board are A-2-3, then if a player holds two 5s, then these two cards act as blockers for the straight.
Example: I decided to 3b bluff with A7s since it had some equity against villain’s range, but more importantly it blocked a large amount of his 4betting range.
Regal Poker is the best online poker game website, visit us and check out our promotions we offer you the best online poker bonus.
The main point about blockers is that you should be aware of them at all times, and also try to play hands that are likely to have blockers. It might go without saying that 88TT is a more valuable hand than 8822, but on a 783 flop, it becomes more obvious. Top set is still top set, but when you hold 88TT, you have blockers to an opponent’s wrap draw (a hand like 6TJ or 569). In this case 569 is more likely because you hold two tens. Take a look at the numbers vs. a wrap draw with 88TT and 8822:
Board: 7h-8c-3s – {8h8dTsTh} = 58%, {5s6d9s2h} = 42%
Board: 7h-8c-3s – {8h8d2h2d} = 53%, {5s6d9s2c} = 47%
As you can see, when your hand has blockers it’s 5% more valuable, which in the long run is a fair amount.
Blockers often influence Omaha hands, because the money usually goes in with the outcome very much in doubt. For example, when you flop a straight, you’re probably only going to get action from two pair or better. So let’s say you flop a straight with 9T on a 8JQ board and get it in with QQ. There is a big difference between holding 9T34 and 9TJ8:
Board: 8h-Qc-Jd – {9sTh3c4d} = 63%, {QdQs3s4h} = 37%
Board: 8h-Qc-Jd – {9sTh8cJs} = 71%, {QdQs3s4h} = 29%
In this instance, having blockers makes an 8% difference. So overall, it’s extremely important to be aware of blockers and how they can help your game.
Get all the latest PokerNews updates on your social media outlets. Follow us on Twitter and find us on both Facebook and Google+!

MGM Resorts and their Gambling Plans for Japan