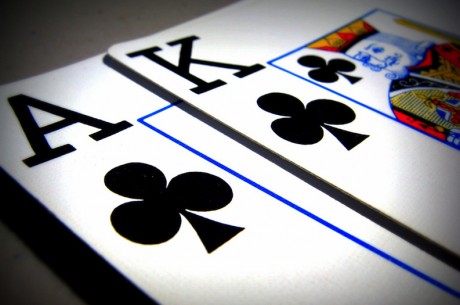 When you’re playing Texas Hold’em and are dealt a pair of pocket Kings or Queens, you immediately calculate good odds of winning the hand. However, your ecstasy may be short lived if the turn displays a higher card, an Ace. If you’re out of position with a pair of Queens, that Ace on the board can seem like a dagger in your heart.
With a high pocket pair and if a higher card appears in the community, you face some tricky challenges. When you’re playing no limit hold’em, these challenges multiply.
Suggested Strategy
Understand that when you’re holding Kings in the hole, there is more than a 22 percent chance that at least one Ace will appear in the community cards. When you hold Queens, the chances of an Ace or King showing up on the board increases to over 41 percent. Accept the math and deal with it.
Assume you raised before the flop on the strength of your pocket pair, but you face one or more opponents who still play before the flop. In most cases, you’ll make a “continuation bet” on your big pair even in the face of the higher card.
At all times avoid becoming intimidated or timid when the higher card appears on the board. Remember, your opponents probably won’t like the Ace or King flop either (unless they have an equal pair in the hole).
By making a strong continuation bet, opponents often assume you’ve made a flop hit and fold. If you’re called or raised, however, you should re-think your position. If an opponent calls or checks, focus on the range of his/her possible hands.
Depending on your hand estimates and prior behavior of the opponent (tight or loose), act accordingly. A good strategy is to play more conservatively. You might want to check to learn about your opponents’ strategy. Should another player make a strong bet, you might even consider folding if you’re convinced the bettor is not executing a bluff.
In all cases, do not adopt a habit of folding in the face of small bets in these hands. You will eventually leave winning pots and money on the table.
Regardless of your position and newfound conservatism, complete your plan. If your strategy is to make another continuation bet on the flop, only going the conservative route if your bet is called. Worst case is that your bet is raised, when you need to decide whether call the raise or fold.
Even if you’re a beginner, don’t play or act like one. Avoid extreme plays, like folding with pocket high pairs, when facing a higher card in the community. Make that continuation bet to force opponents to display how they “feel” about the higher card. Never just assume you now hold a losing hand without some evidence that opponents may hold a higher hand.
The other extreme to avoid is becoming unwilling to let go of a hand when you’re holding high pocket pairs. If opponents display obvious hand strength after the higher card appears, consider folding to cut your losses.

Protect Your Data When Gambling Online