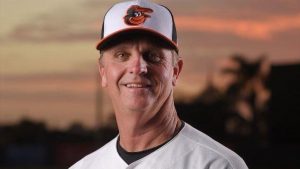 The Philadelphia Phillies are reportedly hiring Bobby Dickerson as part of their major league staff, according to MASN’s Roch Kubatko on Wednesday.
While he could help the team with his experience as an infield coach, Dickerson is also notable because of his connection with free-agent shortstop Manny Machado.
Dickerson had been a third base coach for the Baltimore Orioles since 2012, which coincides with Machado’s time with team until he was traded to the Los Angeles Dodgers last season. The coach also served as the Orioles’ minor league coordinator from 2010 to 2012 while the four-time All-Star was coming up through the system.
According to Dan Connolly of The Athletic, Machado has referred to Dickerson as “one of his most important mentors.” The coach also noted the two had a good relationship during their time together.
Check BetRegal.com and find the best online betting site.
“Manny was always a good guy towards me. He would listen to me at times. I’m not gonna say what I said was gospel. Sometimes we’d get into arguments about something and he’d walk away, and then he would understand it was in his best interests and come back. But I think, overall, when you think about all the years he played in Baltimore, the good and the bad, I think absolutely the good outweighed the bad.”
While this could be a simple hire for the Phillies, it could also be an opportunity to get an edge in the Machado sweepstakes.
The Chicago White Sox, another team in the hunt for the prized free agent, signed his close friend, Jon Jay, this week and paired him with Yonder Alonso, Machado’s brother-in-law, per Bob Nightengale of USA Today. The three grew up together Miami and remain close.
Get all the latest Betting and Sport News updates on your social media outlets. Find us on both Facebook and Google+
Although there will likely be a lot of factors to help the 26-year-old decide on a destination, these teams are seemingly attempting to build on his personal and professional relationships.