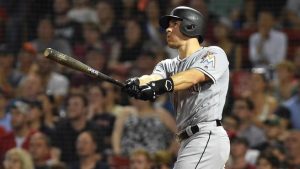 The Philadelphia Phillies have acquired catcher J.T. Realmuto from the Miami Marlins. And they’re paying a heavy price to do it. The clubs just announced that the Phillies are sending top pitching prospect Sixto Sanchez, catcher Jorge Alfaro, lefty Will Stewart, and international bonus pool money to Miami.
Realmuto, who will turn 28 during spring training, is coming off an All-Star season in which he hit .277/.340/.484 with 21 home runs, 74 RBI, and 74 runs scored in 531 plate appearances. By FanGraphs’ version of WAR Realmuto was the best catcher in baseball in 2018 by a substantial margin, outpacing second-place Yasmani Grandal by 1.2 wins. He was hurt by his pitcher-friendly home park as well, so between a literal change of scenery from moving to Citizens Bank Park and a philosophical change of scenery from leaving the dreary world of Miami Marlins baseball, there is reason to believe that he’ll have a nice 2019.
Check BetRegal.com and find the best online betting site.
To get him they are giving up one of the top prospects in all of baseball. Sanchez, 20, throws what ESPN’s Keith Law recently described as “the easiest 100 mph fastball in pro baseball.” He was just ranked as baseball’s 13th best overall prospect by Baseball America, 23rd by Baseball Prospectus, 27th by MLB.com, and 35th by ESPN. This despite the fact that he has yet to pitch an inning above A-ball. While his 2018 season was cut short by elbow inflammation, he is reported to be healthy again and ready to resume a minor league career that has already seen him post a 2.48 ERA and a K/BB ratio of 191/43 in 221.1 innings.
Realmuto is certainly an upgrade behind the plate for the Phillies. The question people will ask, at least if Sanchez fulfills his considerable potential, is whether the Phillies could’ve realized a significant upgrade behind the plate by signing a free agent, such as Wilson Ramos or Yasmani Grandal and giving up only money, rather than a blue chip prospect, to do it.
Get all the latest Betting and Sport News updates on your social media outlets. Find us on both Facebook and Google+
For now the Phillies are finally getting their man and the Marlins, at long last, are unloading a catcher who made no secret about wanting out of Miami.