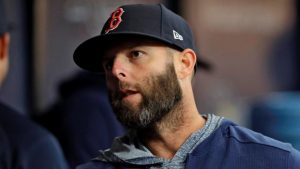 The Boston Red Sox say second baseman Dustin Pedroia has had another surgery on his troublesome left knee.
Pedroia, 35, has played only six games this season, all in April, and was limited to three games last year.
The Red Sox say Pedroia had knee joint preservation surgery on Tuesday in Colorado. He will begin his rehabilitation in Arizona.
Although Red Sox manager Alex Cora hinted at Pedroia’s desire to play again, he told reporters that the second baseman won’t be ready to return in 2019.
“As everybody knows, he had a procedure, something to ease the pain or [take the] pain away,” Cora said. “Just another step to see if he can feel better and see where it takes us.”
Cora added that Pedroia is “going to keep trying to find ways to make this happen, and we’ll see where it goes.”
Check BetRegal.com and find the best online betting site.
Tuesday’s procedure was the latest of several surgeries Pedroia has had on the knee since he injured it taking a hard slide from Manny Machado in 2017. Though Pedroia managed to play 105 games that year, hitting .293/.369/.392, he did so largely on one leg, and required hours in the trainer’s room every day.
A four-time All-Star and the 2008 AL MVP, Pedroia said in May that he would take an indefinite leave of absence in his struggle to recover from the knee issues, putting in doubt his path back to the big leagues.
The latest procedure was intended to diminish lingering discomfort from the cartilage restoration surgery that Pedroia underwent in October 2017. Whether it ever permits him to play again remains to be seen; there are no known instances of a player returning to professional sports from subchondroplasty. Pedroia will not play again in 2019.
Get all the latest Betting and Sport News updates on your social media outlets. Find us on both Facebook and Google+
“I’m at a point right now where I need some time,” Pedroia said, acknowledging candidly that he wasn’t sure if he’d ever be able to play again.
Pedroia will take stock of his playing future based on how he responds to the surgery and rehab process.

Dodgers to 'take our time' with Verdugo injury