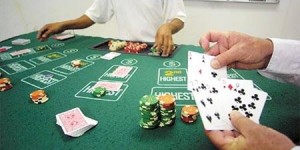 Check Regal Poker for Latest Poker News, poker strategy tips and more.
Pai Gow Poker is a variation of the Chinese domino game called Pai Gow. The game is played with 53 cards instead of 52, including a joker that is used as a wild card. The dealer plays one player at a time, which is the only similarity this game shares with the game Blackjack.
Pai gow poker is played among up to seven players. One of the players is designated as the player-dealer. Each player is dealt seven cards, which are arranged into two hands. One hand consists of five cards; the other hand consists of two cards. After players have arranged their hands so the five-card hand ranks higher than the two-card hand, the house dealer reveals and arranges the player-dealer’s hand.
At Regal Poker you will find the best articles about how to play poker, visit us and check out our promotions we offer you the best online poker games.
Having a strategy for playing pai-gow poker is a must. But “having a strategy” means several different things.
First, you must know how the casino is going to play the dealer’s cards. This is one of the biggest things that people often neglect to think about when they are playing.
The dealer has to play by what is called the house way. Since the house is playing this way, you should assume that it is the best way to play. There are some situations where you have a little leeway with this, but this mostly involves having two pairs. I’ve highlighted first in the section below because it is the most common hand that involves a big decision.
You can decide to deviate from the strategies below, but playing the house way is often the best way to go in the long run.
The House Way varies slightly from casino to casino, but here is the general rules that most casinos will follow:
The House Way
The following rules apply: cards valued 2 to 6 are considered low, 7 through 10 are considered medium, and all others are high cards.
In regards to Two Pairs:
If the dealer is dealt two medium/low pairs, they will split the pairs up and put the lower of the two pairs in the low hand. The only exception is if they are also holding a King or better.
If the dealer is dealt a high pair and a low pair, the lower pair will be put into the 2 card hand unless the dealer is also holding an Ace. This also applies if the dealer receives two medium ranked pairs.
Straights and Flushes:
The dealer will only break up straights or flushes if they have one of the following two pair scenarios:
If the dealer has aces and any other pair, he uses the lower pair for his low hand.
If the dealer has two pairs that are both 10’s or over, the pairs get split up.
If the dealer has two pairs and an Ace, the Ace and next highest singleton are used in the low hand.
Four of a Kind:
If the four of a kind is low, than it is always kept intact in the high hand.
If it is a medium four of a kind, the dealer will split unless they have an Ace and a face card.
A high four of a kind is split unless the hand also contains a medium/high pair.
High Card – the dealer will take the second and third highest cards from the seven to make the low hand.
One Pair – the dealer will take the highest two singletons from the remaining five cards for the low hand.
Three Pairs – the dealer will put the highest pair into his low hand.
Three of a Kind – the dealer will play only break up the three of a kind if they have three Aces and need one for the low hand.
Full House – the dealer will always split up a full house unless it contains a pair of two’s and an Ace/King can be played.
Straight Flush – this is played in the high hand unless one of the conditions for two pairs with a straight or flush is met.
Royal Flush – the dealer plays the Royal Flush unless also has two high pairs or Aces and any other pair, in which case the cards are split.
Five Aces – the dealer will split Five Aces unless he also has a pair of Kings to play in the low hand.
Don’t miss our special articles about Texas Hold’em and blackjack, become the best player that you can be! Get all the latest PokerNews updates on your social media outlets. Follow us on Twitter and find us on both Facebook and Google+!

Jason Mercier Gets Back to No. 2