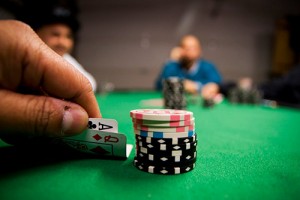 Check Regal Poker for Latest Poker News, poker strategy tips and more
Since the advent of online poker, everything about the game has gone into overdrive. Shuffling is instantaneous, dealing is measured in microseconds and the clock is on as soon as you get your cards. Even casual players now play on multiple tables, while ‘volume’ has become the holy grail for pros.
Because of the sheer number of hands being logged by players around the clock, the way people play the game also changes and develops at a frightening rate. Players observe what other players are doing and learn how to adapt to them much faster than if they were playing live, resulting in an ever-shifting battleground of strategies and counter-strategies.
At Regal Poker you will find the best articles about how to play poker, visit us and check out our promotions we offer you the best online poker games.
Here we’ve assembled five of the latest tactics being used by top players right now. Add them to your arsenal and stay one step ahead of the competition :
The Unexploitable Shove
What is it?
The so-called unexploitable shove is a move used in no-limit Hold’em sit-and-gos and tournaments, where the small blind, or sometimes the button, makes a seemingly large open shove preflop, usually for somewhere between 15 and 25 big blinds. Generally there will be antes in play to make the move effective.

How to defend against it
Here’s the thing – you can’t. If you’re in the big blind and the small blind makes an unexploitable shove, your hand and the range of hands you’d call with don’t matter – the shove will still be profitable. Of course that’s not to say you should simply give up.
The best reply to an ‘unexploitable’ shove will generally be to fold all but true premium hands, but your range may also influenced by your stack, your opponent (are they sophisticated enough to know what they are doing with this move?), the payouts (are you playing to win or just ladder up?) and so on.
The River Overbet For Value
What is it?
An overbet is usually defined as a bet that is greater than the size of the pot. A river overbet for value happens in cash games more frequently than in tournaments, as stacks are commonly deeper and there’s no fear of losing your tournament life.

How to defend against it?
Folding is the obvious answer, especially as you won’t be getting fantastic pot odds to call. Also, with all the cards out and the information from previous streets available, before taking any impulsive action it’s time to go over the action that occurred on previous streets and try to work out if it smells of value or a bluff.
If you see this move being deployed in a hand you’re not involved in, take good notes. Few players are capable of sometimes overbetting the river for value and sometimes as a bluff.
Pot Control
What is it?
Pot control is a way of keeping pots small, either in tournaments or cash games. This is achieved by just calling out of position preflop with a good but not great hand or checking in position on at least one street postflop. Situations where you might want to play a small pot include spots where you’re either way ahead or way behind, you can’t get three streets of value or you can’t stand a check-raise.

How to defend against it?
Playing out of position is tough, and as pot control isn’t an aggressive play it’s not so much that you’ve got to defend against it as get value out of your big hands when out of position. The best way to do this is by trying to make your foe commit a big mistake. Usually this means leading into them with strong hands and making them play a guessing game
The Donk Lead
What is it?
The donk lead is a term that describes an open bet into the preflop raiser out of position on the flop. This is opposed to the more conventional play of ‘checking to the raiser’.
How to defend against it?
Just as the preflop raise no longer means strength, neither necessarily does the donk lead. In its infancy a donk lead was often a set, with the lead hopefully enticing the preflop raiser (whose raise used to mean strength) to make a big mistake and come over the top.
Now a donk lead tends to be quite polarized between strong hands like sets and hands that are, rightly or wrongly, betting for information and to see where they stand. The latter is often a hand such as second pair (something like 8-8 on an A-7-3 flop) or even top pair, weak kicker.
On uncoordinated boards, a raise often gets the trick done and sees the donk-leader slide his cards into the muck. On coordinated boards, especially any that contain two cards between eight and Queen, it’s usually best to give up the hand if you’ve got nothing, as these types of boards smack out-of-position flat-calling ranges square in the face. Even if the donk-leader is semi-bluffing with a draw, he’s got many outs to make his hand.
Checking to Induce
What is it?
This tactic is used on the flop, where instead of betting with what you believe to be the best hand, you check to under-represent the strength of your hand and induce your opponent(s) to either bet into you or raise you on subsequent streets. While it increases your chances of being outdrawn, it also allows you to win extra bets that you would have lost had you played your hand in a straightforward fashion
How to defend against it?
Don’t automatically assume that because the preflop raiser checked the flop they haven’t got a hand. It’s not always a green light to lead into them on the turn. So if you check and they bet the turn, you call and then they bet the river, it’s very likely that one pair, even top pair, is not winning. The best way to defend against this move is to play as few pots out of position as possible.
Effectiveness Rating – 3/5
See it in action
In this hand from the 2004 WSOP Main Event, Greg Raymer makes the Devilfish look a bit silly by inducing him to bluff with King-high. The key is when Raymer checks behind on the 7-8-3 flop, despite it being fairly likely his sixes are ahead, thereby convincing Devilfish that he has missed or has a very marginal hand.

WHAT IS FOLD EQUITY?