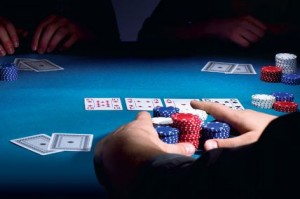 Check Regal Poker for Latest Poker News, tips and more.
A pair, completed by matching one of your hole cards with the highest ranking card on the board.
Poker games are generally categorized as flop, stud, or draw games. Flop games, like Hold’em and Omaha, use community cards.  In a Hold’em game, there are two hole cards delivered to each player, and there are a total of five community cards dealt during the course of the hand. This means that five out of the seven cards that each player forms their hand from are identical. This only happens in flop games, as community cards are rarely used in other types of poker games.
At Regal Poker you will find the best articles about how to play poker, visit us and check out our promotions we offer you the best online poker games.
It is important to note that poker is a game of relative hand strengths. At showdown, what matters is the strength of your hand relative to the strength of your opponent’s hands. The specific ranking of your hand doesn’t matter at all. If you make a full house, and your next closest opponent makes a straight you will win the pot, because you have made the stronger hand relative to the hand of your opponent. That does not mean your goal is to make a full house. It is entirely possible that you can make a full house and lose. Your goal is only to beat your opponents.
Since each player only has two hole cards in a Hold’em game, making a strong hand can be difficult if the board is not homogenous. If the five cards from the board are disparate, and do not form a strong draw, it is likely that the players will not have hands that rank very highly. When this is the case, one pair can be a strong hand, and has a good chance of winning the pot.
We know that players are mainly focused on the strength of their hands relative to the strength of their opponents. We also know that community card make up a large percentage (over 71% at the river) of each player’s hand. It follows then, that players are concerned with the ranking of the community cards relative to each other. When a player makes a pair, by matching one of their hole cards to one of the community cards from the board, it is often described by its ranking relative to the other cards that are on the board. Imagine that you hold Q♣ J♠, and the flop comes J♥ 8♠ 7♣. You have flopped “top pair,” because the jack is the highest card on the board. If you had instead flopped a pair of eights, you would have “middle pair,” and if you had flopped a pair of sevens, you would have bottom pair. You can see that the focus is not necessarily on the specific rank of your pair, but on its ranking relative to the other cards on the flop.
If you are discussing action on the flop, when only three community cards are in play, using the terminology “top pair,” “middle pair,” and “bottom pair” is an effective way of describing the relative strength of pairs. By the river, five community cards are in play. At this point, “top pair” and “bottom pair” are still effective, but “middle pair” is no longer descriptive enough, because there are three cards in the middle (assuming the board is not paired), sandwiched between the top card and the bottom card. In this situation, the cards on the board are often ranked numerically, for example, “top pair,” “second pair,” “third pair,” “fourth pair,” and “bottom pair.”
Keep in mind, that as new community cards hit the board, the relative rankings of those cards tend to change. Consider our previous example where you held Q♣ J♠, and the flop was J♥ 8♠ 7♣. On the flop, you held top pair, and the bottom pair, if it were out there, would have been the seven. Now imagine that the turn card is the K♠, so that the board reads J♥ 8♠ 7♣ K♠. The king, should somebody have it, is now the top pair, and your pair of jacks has become second pair. Similarly, if the river card were the 4♠, it could replace the seven as bottom pair. So, the ranking of your pair can be transient as the hand progresses. Sometimes, you will have a pocket pair which is higher than any of the cards on the board. Consider our board of J♥ 8♠ 7♣ K♠ 4♠. If another player held A♣ A♠, they would have an “overpair,” because this pair is higher than any pair on the board.
Since one pair is often good enough to win in a Hold’em game, your second hole card, called your “kicker,” often comes into play. If two players make the same pair, the pot is often awarded to the player with the higher kicker (so long as it plays). For this reason, when players are describing the relative strength of their pair, they often include information about their kicker. With a board of J♥ 8♠ 7♣ K♠ 4♠, your holding of Q♣ J♠ would be read as “second pair, queen kicker,” and would beat any other pair of jacks with a lower kicker. Since the ace is the highest card in the deck, it is often referred to as “top kicker.” If someone held A♥ K♣ with this board, their hand would be read as “top pair, top kicker,” which is sometimes abbreviated as “TPTK.”
Get all the latest PokerNews updates on your social media outlets. Follow us on Twitter and find us on both Facebook and Google+!