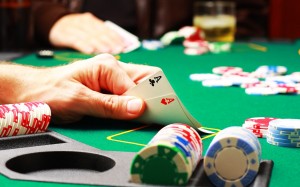 Check Regal Poker for Latest Poker News, tips and more.
If you slowroll someone, then this means that you take an incredibly long period of time to call when your opponent is already all-in, you have the stone cold nuts and there is nobody let to act.
Slowrolling someone is incredibly bad poker etiquette, so you better have a really good reason for doing so.
Regal Poker is the Poker Online website, visit us and check out our promotions we offer you the best place to play online poker bonus.
When a poker hand is over, there is a specific order in which the hands are supposed to be turned over. The last person to initiate a bet or raise on the last round of betting, is supposed to turn their hand over first. This gives the players who have called the opportunity to see the called hand before having to show themselves. After the player who initiated last action shows, hands are supposed to be shown down in a clockwise order, starting with the first player on his left. In most poker rooms, if there is no river bet, hands are to be shown down in a clockwise order, starting with the small blind position. Some house rules require that the last person to initiate action turn their hand over first, regardless if there was a bet on the final betting round. This requires the dealer to remember who the last person to initiate action was, and request that they be first to turn over their hand.
While this order of operations at showdown exists, it is not always adhered to completely. It is only strictly adhered to if there is a dispute between players over who must show down first. This type of dispute does not arise very often, because players are generally eager to show their hands if they think they may have won the pot. It is customary for the first step in the order of operations be adhered to, which is that the last person to initiate action to turn their hand over first. This player will usually do this without being prompted, but sometimes they will hesitate. If they hold a busted draw, a bluff, or other hand they believe cannot win with, they may not turn their hand over immediately, and may even muck rather than show. If they hold back their hand, it is usually because they are hoping that the winner will take the opportunity to show, so they can muck their hand without showing. In any event, if the last person to initiate action hesitates when it is time for them to show, it usually indicates that they have a weak hand.
Looking for best online poker room website? Follow us and check out our promotions we offer you the best online poker bonus.
If someone has a strong hand at showdown, they are usually eager to turn it over and collect the pot. This means that when a player shows down a hand, they expect to find out relatively quickly if they are beat. They expect that anyone able to beat the hand they have shown will turn it over quickly in an attempt to claim the pot. If no one does, they will justifiably believe that they have won the pot. This can open the door to mischief. In an attempt to get under the skin of their opponents, a player may wait to show the winning hand until after their opponent has shown, and a long enough period of time passes without a better hand being exposed, that their opponent expects to win the pot. Then, just as their opponent is about to rake in the pot, they show them the winner. This is called a slow roll, and it is considered an extremely rude thing to do. It bothers some players a lot, which is precisely the goal of the player who slowrolls. Slowrolling is often a response to, or a trigger for, all out psychological war between players.
Get all the latest PokerNews updates on your social media outlets. Follow us on Twitter and find