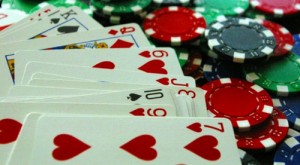 Check Regal Poker for Latest Poker News, tips and more.
To discard or throw away your hand thereby folding and taking them out of play. Muck is especially used when discarding cards after an opponent reveals a better hand than your own. When players muck their cards they are returned to the dealer.
The term can also refer to the discard pile of cards no longer in play. The collection of face-down discarded cards gathered in the centre of the table near the dealer. The pile contains folded hands, burns and discards for drawing purposes.
Regal Poker is the Poker Online website, visit us and check out our promotions we offer you the best online poker bonus.
In many poker games, once a card has been discarded, it can not be brought back into play for the remainder of the hand, except under extreme circumstances. This means that discards are considered “dead cards,” and must be treated as such. One of the jobs of the dealer is to collect the dead cards, and keep them in a separate pile, away from the cards in play. This pile of cards is called “the muck.” The “muck” typically consists of all discarded or fouled hands, plus any other dead cards, which typically result from dealer error (for instance, boxed cards, or cards burned and turned too soon.) The dealer keeps this pile of cards face down on the table, either in front of, or to the right of the box. The dealer is expected to do his best to physically protect the muck, to prevent live cards from entering the pile.
This is important, because live cards entering, or even touching the muck, may be fouled. Sometimes a player will lose a hand he was going to win, because he has had his hand fouled by the muck. Typically, this happens when a player is not careful about the way he shows down at the end of a hand. In most poker rooms, a hand is not considered a valid shown hand until all cards are placed face up on the table so all can see. If a player turns his cards over incautiously, one or both of them may accidently touch or land in the muck. This can result in a fouled hand.
In addition to preventing live cards from going into the muck, it is also the dealer’s responsibility to prevent dead cards from coming back out of the muck. This is called protecting the muck. Players may wish to remove cards from the muck in an attempt to cheat, either by peeking to see which cards are out of play, or more blatantly, by attempting to incorporate previously mucked cards into their live hands.
Looking for best online poker game website? Follow us and check out our promotions we offer you  the best online poker bonus.
Although rules vary from poker room to poker room, the muck is often considered a point of no return. In other words, a hand is generally considered live until it touches the muck, at which point it is considered dead. It is part of the dealer’s job to kill hands as they are discarded, by touching them to, then burying them in, the muck. For this reason, all players need to take responsibility for protecting their live hands from being fouled by the muck. The best way to do this is to be aware of where the dealer is keeping the muck, and stay away! It is also a good idea to protect your hand by placing a chip or other small object on top of it while the hand is in play. This will prevent the dealer from inadvertently grabbing a hand he thinks you have mucked, when you haven’t. Remember, the muck is toxic to your good hand.
Depending upon house rules, management may reserve the right to retrieve an identifiable hand from the muck and allow it to play, even after it has been killed, if they feel it is in the best interest of the game. This rule is generally used as redress if a player has had their hand killed unjustly, or through no fault of their own.
While touching the muck is capable of fouling an otherwise good hand, it is not the only danger. Poker hands may be fouled in many ways that do not involve touching the muck. For example, hands dropped on the floor may be fouled, or hands containing too few or too many cards may also be fouled. In addition to this, there are many other ways a hand can be fouled. It does not matter why or how the hand was fouled, once it is determined to be a fouled hand it is placed face down in the muck. The muck is essentially a graveyard for cards that have been taken out of play.
In some poker games, it is possible for cards to be brought back into play from the muck. This most commonly occurs in the later rounds of draw games, when the dealer does not have enough cards remaining in the stub to complete the draw for all players. In this case, the dealer will typically back shuffle the entire muck with the remaining stub before distributing any cards for that round. This gives all players an equal chance of receiving previously mucked cards. The deal is then continued as usual.
In addition to being a physical place, the term “muck” is also commonly used as a verb, to describe the process of throwing your hand away. When it is your turn to act, you can either play, or “muck” your hand, which you do by discarding toward the muck.
Usage: Mucked my hand, Tossed it in the Muck, Landed in the Muck, Muck the Cards, Muck it!
Get all the latest PokerNews updates on your social media outlets. Follow us on Twitter and find us on both Facebook and Google+!

Poker News: 2015 World Series of Poker Europe To Be Held in Berlin

Poker strategy: How to Constantly Improve in Poker