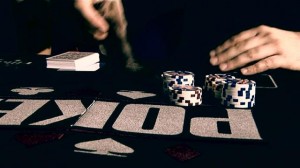 Check Regal Poker for Latest Poker News, tips and more.
In poker, a “hit and run” occurs when somebody enters a cash game, wins a large amount of money in a short period of time, and subsequently leaves the table almost immediately.
A “hit and run” is considered to be very poor poker etiquette, as players are expected to be given a chance to win some of their money back.
Regal Poker is the Poker Online website, visit us and check out our promotions we offer you the best online poker bonus.
The problem with this type of behavior is that it is very rude to the other players in the game. While it is usually legal to get up from a cash game at any time, doing so after a very short play violates an unwritten rule, as most players consider it disrespectful to hit and run on somebody. There are a number of arguments against hitting and running. First of all, it is detrimental to the game to the point where it shows a general disrespect to the other players who are playing in it. For one thing, It shows a disregard for the competitive nature of the game. A poker game is a competitive event, and as a new player you are expected to stick around and play for awhile. If someone does hit and run, there are often consequences for the game. The player who got hit and run on is likely to be upset or offended, especially if he got hit and run on for a large amount of money. This can ruin the atmosphere, and make the game less fun and less profitable for the good players to play in. The change in atmosphere alone can be enough to run players off. In addition to this, the hit and run artist is getting up from the game. This can make the game weak and put pressure on a shorthanded game to break. So in addition to being rude, hitting and running can actually be very detrimental to the game.
Looking for best online poker game website? Follow us and check out our promotions we offer you  the best online poker bonus
To discourage hitting and running, many casinos have rules in place which help to discourage it. One rule that most casinos share has to do with the length of time you must wait after cashing out, before you are allowed to buy back in for the table minimum. It is a requirement in most casinos that once you cash out or leave the game, you must wait an hour or two before you are permitted to buy back in, so long as you intend to buy in with fewer chips than you cashed out with. In other words, if you return to the same game within the timeframe outline in the house rules, you are required to buy in with as many or more chips than you initially cashed out. Your only other options would be to play a different game, quit for the day, or to wait the time out, at which point you would considered a new player, and would be free to buy in for anything equal to or greater than the table minimum. This rule prevents players from hitting and running. You cannot cash out, pocket the profit, and immediately return to the same game. That is part of what makes a game “table stakes,” which virtually every casino poker game is. Table stakes simply means that only money or chips that are on the table may play, and that everything that is on the table must play. Players may not remove chips from the table (other than small amounts for incidentals), and they may not go into their pocket for more money during the hand.
If you do get hit and run on, you should keep it in perspective. It really is not a big deal. When your opponent sat down, he was just as likely to lose to you as you were to him over the short run. Playing only a few hands does not give you any advantage over the long run. Over the long run, the hit and run strategy only benefits players who play poorly, because it causes them to play fewer hands, so they lose less. It is a terrible strategy for winning players for exactly the same reason. It limits the number of hands that you play, and that can only hurt you over the long run.
Combating Hit and Runs
Since you can’t prevent a hit and run, the best way to combat it when it happens to you is to just wipe it from your memory. When the hit and runner stacks you, you need to remove yourself from the notion that he just took ‘your’ money. When he leaves the table, another player will replace him with more money. In short, there’s no reason you need to win back the money you just lost from the same person – the less personal you make poker, the more successful you’ll be.
Get all the latest PokerNews updates on your social media outlets. Follow us on Twitter and find us on both Facebook and Google+!