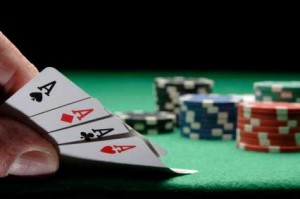 Check Regal Poker for Latest Poker News, tips and more.
The float play essentially involves calling an opponent’s bet on the flop (floating the flop), and then betting after being checked to on the turn to win the hand before seeing the river card. It is possible to make a successful maneuver like this with any two cards, which typically makes it a good bluffing play.
Regal Poker is the Poker Online website, visit us and check out our promotions we offer you the best online poker bonus.
How to make a successful float play.
There are two criteria however that have to be met before being able to pull off a good float play.

It is actually possible to make a float play out of position, but this is far more difficult and it is not often recommended that you try to do so as it can become costly. In position you have the opportunity to spot any weakness on the turn from your opponent after calling their flop bet. If your opponent bets strongly again on the turn, you are able to comfortably fold knowing that they more than likely have the best hand. If they check however, you are in the perfect position to take down the pot.
A second and equally important rule for a good float play is that you should be heads-up against your opponent. If there is more than one player in the pot, it makes it more difficult to pull off such a complex bluff, as it is more likely that at least one of the players has a decent hand.
The float play relies on us trying to pick off a continuation bet from our opponents, and the addition of another player into the equation adds too many variables to make it successful, and often our attempted display of strength will go unnoticed. Therefore it is best to keep things simple, and stick to being in position against one opponent when attempting a float play.
Looking for best online poker game website? Follow us and check out our promotions we offer you  the best online poker bonus.
Float as a Bluff
One does not need a made hand to execute a float, even though the expected value will be elevated when one possesses a draw with which one could win the showdown if it were completed. Calling a continuation bet can be done as a pure bluff to represent a strong hand or slowplay or to show an opponent that the pot will not be easily won and to convince him to give up his bluff.
Many players avoid making a bet in the third betting round without a good made hand if an opponent calls two bets in spite of that player’s aggression. A float is therefore useful when a player is in position to give up his hand if it does not improve after his opponent has called a continuation bet. Against players who often make a third bet, a float is useless. It is also useless if an opponent only makes a continuation bet when he has a good hand. Players who often make a continuation bet after a raise and then fold when their hand does not improve are ripe for floats.
A typical floating scheme in Texas Hold’em goes like this:
Preflop: Player A raises, player B calls.
Flop: A bets, B calls.
Turn: A checks, B bets, A folds
Get all the latest PokerNews updates on your social media outlets. Follow us on Twitter and find us on both Facebook and Google+!