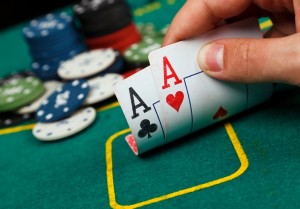 Check Regal Poker for Latest Poker News, tips and more.
Noun
A five-card combination that forms two different inside straight draws; a hand including three consecutive cards, the card two ranks higher than the top card of those three, and the card two ranks lower than the bottom card of those three; double gut shot.
ADDITIONAL INFORMATION: Example: A-Q-J-10-8 is a double belly buster because a King would complete the inside straight A-K-Q-J-10 and a 9 would complete the inside straight Q-J-10-9-8. This hand is only possible in games where there are at least six cards used, as the term is not used to describe such a hand when there are no remaining cards to be drawn. A double belly buster has the same probability of being completed on a given draw as does an open-ended straight draw, and the probability of completing either is twice the probability of completing an inside straight draw.
Regal Poker is the Poker Online website, visit us and check out our promotions we offer you the best online poker bonus.
A “belly buster” draw is slang terminology for an inside straight draw. This type of draw is also commonly called a “gutshot” draw. There are many different nicknames for the various types of straight draws a player will face. These are usually descriptive in nature, because of a need to differentiate between straight draws with differing values. The value of a straight draw can vary quite widely, and is affected not only by the innate quality of the draw, but also by the situation the player finds himself in. Some of these differences in value are subtle, and some are more obvious. Much of this is due to the fact that different types of straight draws will have different probabilities of being completed as well as different probabilities of holding up when completed.
Straight draws are often classified by the layout of the draw and the number of natural outs the draw contains. For example, a straight draw can either be a “gutshot” or belly buster, a “double” gutshot (or double belly buster), or an “open ended” draw.
The belly buster draw is typically the least valuable draw of the three. It is an “inside” or “middle” straight draw, which means that if the player is to complete the straight, a card must be hit on the inside, or in the middle of the draw. For example, if a player held 4♠ 5♣ 7♦ 8♥, he must catch an “inside six” in order to complete his hand. This type of draw is significantly less valuable than both the double belly buster, and open ended variety. This is because it can only be completed with one rank of card, whereas the double bellybuster and open ended draws may be completed with either of two ranks. Obviously, having only one card available, as opposed to two, cuts your number of outs in half. This makes you half as likely to complete your draw, and significantly lowers the value of the draw. In fact, it often lowers the value of the draw to the point where it has negative value and is not worth taking. Many bad players either don’t understand this, or don’t have the discipline to throw away their hand when they face a draw they shouldn’t take. For this reason, belly buster draws are often associated with bad play, because they frequently require making a bad call in order to complete.
The double bellybuster draw, like the bellybuster, requires that a card be hit on the inside. The similarities pretty much end there. Its value more closely resembles that of the open ended draw, because it also contains eight outs. It requires that six cards be in play, while the belly buster draw can happen on the flop. An example of a double belly buster draw would be 4♠ 6♠ 7♦ 8♥ T♣. You can see that this straight can be completed with either a five or a nine.
Looking for best online poker game website? Follow us and check out our promotions we offer you the best online poker bonus
Odds of Hitting a Double Gutshot
Essentially, a double gutty is the same as an open-ended straight draw (OESD). That is, you have two streets and eight outs – roughly a 30% chance – of hitting your hand.
Playing a Double Gutty
Where double gutshots differ from OESDs is in disguisability. To a certain degree, it’s easy for observant opponents to include 45, 58, and 89 (OESDs) in your range on an A67 flop. However, opponent’s will often fail to realize that you might hold 67 on a T84 flop, simply because it’s harder to see. For this reason, you can usually play your double belly buster draws fairly cautiously, and maybe even extract extra value if you make your hand (since your line won’t make sense to an opponent who doesn’t include a double gutter in your range).