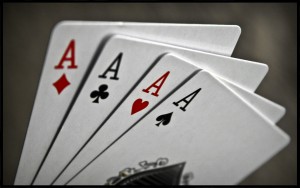 Check Regal Poker for Latest Poker News, tips and more.
Double Belly Buster is a five-card combination that forms two different inside straight draws; a hand including three consecutive cards, the card two ranks higher than the top card of those three, and the card two ranks lower than the bottom card of those three; double gut shot.
At Regal Poker you will find the best articles about how to play poker, visit us and check out our promotions we offer you the best online poker games.
Example: A-Q-J-10-8 is a double belly buster because a King would complete the inside straight A-K-Q-J-10 and a 9 would complete the inside straight Q-J-10-9-8. This hand is only possible in games where there are at least six cards used, as the term is not used to describe such a hand when there are no remaining cards to be drawn. A double belly buster has the same probability of being completed on a given draw as does an open-ended straight draw, and the probability of completing either is twice the probability of completing an inside straight draw.
Since it always takes five cards to make a DBB, Texas Hold’em and Omaha players can make these on the flop, while Seven Stud players can have them on fifth street. Even though DBBs make a fairly strong flop or fifth street draw hand, they can be a little difficult to spot and often go un-noticed. Since you have two draws to get at least one of two denominations needed for a straight, the strength of the draw hand is the same as a four card open-end straight (about 31% for or 2 to 1 against).
Five Card Double Belly Busters can be any of eight similar but different groups from A to 7 on up. Any one of these can be described as a 7 card “straight” draw with two gaps and a 3 card straight in the middle. Or, if you prefer, a 3 card straight that makes an inside straight draw on both the high and low ends.
If you should happen to have five of the seven cards needed for seven straight and you don’t have both ends or if the gaps are other than shown above, you might have a good hand but you don’t have a DBB.
Here are all of the eight possible DBBs:

Since five card hands are of course, hardly ever dealt in this orderly way, it helps to be on the alert for DBBs. When you get your first five cards and can’t find anything you like better, look for a 3 card straight to see if it will make a DBB draw that you might want to use.
Get all the latest PokerNews updates on your social media outlets. Follow us on Twitter and find us on both Facebook and Google+!