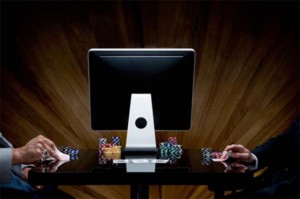 Check Regal Poker for Latest Poker News, tips and more.
Want to learn how to play poker online?
The world of poker tournaments looks pretty complicated at first. But we simplify matters by looking at tournaments from a handful of different angles:
Single-table vs. multi-table
The simplest kind of poker tournament takes place at just one table. Usually 8-10 players enter the event, though some sites have special 2-seat tables for heads-up play. As players “bust out” (lose their last chip), nobody takes their place and the table gets shorter and shorter handed. Eventually, one player wins all the chips and the tournament is over. At that point, the prize pool is divided among the players according to some payout schedule. Typically, the first place player gets about half the money while second and third get smaller shares, perhaps 30% and 20%.
The “multi-table” tournament format allows a much larger number of people to play in the same event. Online events often have thousands of entrants. Each player is assigned to start play at a certain table. As players throughout the tournament bust out, the poker server moves players into the vacated seats and reduces the number of tables. Eventually, play comes down to two opponents, just like in a single-table event, and ends when one player wins all the chips. At that point, the prize pool is divided among the top-finishing players. Again, first place pays the most, but multi-table events generally pay a larger number of players than a single-table event. Typically, the top 5% to 10% of finishers receive some portion of the prize pool.
Regal Poker is the Poker Online website, visit us and check out our promotions we offer you the best online poker bonus.
Sit-and-go vs. scheduled
The “sit-and-go” tournament is the more informal type of event. Usually these events have just one or two tables. The poker lobby shows a list of sit-and-go events that are open for sign-ups. As soon as enough players sign up for a sit-and-go event, it starts. These events are a great way to get a lot of “final table” tournament experience: in a single-table sit-and-go, you start out at the final table!
A “scheduled” tournament has a specific start time announced in advance. The poker lobby shows events of this kind coming up in the next few days or weeks. Players sign up in advance and then arrive to play at the scheduled time. Most of the larger events are of the scheduled type.
Buyin – play-money vs. freeroll vs. real money
The “buyin” is what each player pays to enter the tournament. If the buyin is play money, that means you use a certain number of play money credits to sign up. If you win the tournament, you’ll win play money credits in return.
A “freeroll” tournament is one that does not require a real money buyin but pays out a prize pool of real money. These are a fun way for a beginner to start because there’s no risk of losing any money but a chance to win some in return. There are a few kinds of freerolls. The best kind is absolutely free: you just sign up. Not all sites offer these. The more common kind is a “frequent player point” (FPP) freeroll. You use points earned in the poker site’s loyalty program to buy in. These are very popular. At some sites you can even earn FPPs by playing in the play money games, so this can be another good way to get started without going to the trouble of depositing real money.

Satellite vs. regular events
A “satellite” is a special kind of tournament in which the prize is an entry into another tournament. For example, a single-table satellite might have a $100 buyin and award one seat to a tournament with a $1000 buyin. Satellites are a popular way for players to get into a high-stakes tournament when they prefer not to buy in directly for such a large amount. A famous satellite example is Chris Moneymaker’s $40 buyin to a World Series of Poker satellite: he eventually won the big event (which costs $10,000 to buy in directly) and took home the $2.5 million first prize.
Some satellites have more than one table and award more than one seat into the bigger event. A satellite can have its own mini-satellites. Or a satellite can be a FPP freeroll, where you use FPPs to buy in and the prize is an entry in a real-money tournament. The real-money tournament might even be offline, say, in Las Vegas. All sorts of combinations a possible, such as a multi-level FPP freeroll into the World Series of Poker.
Most tournaments are not satellites. They are just plain tournaments, in which the buyins go into a prize pool and the prize pool is awarded to the top finishers in the tournament.
Freezeout vs. rebuy events
Most poker tournaments are “freezeouts”. In this format, you buy in at the beginning and when you lose all your chips, you are out. But some tournaments have a “rebuy” option. When you run out of chips, or even if you just run low, you can choose to buy more chips. The rebuy amount is typically the same as the buy in amount, though it can be less, and you usually get chips at the same or better exchange rate as at the initial buyin (for example, 1000 chips for $20). The rebuy period is normally limited to the first few rounds of the tournament. At the end of the rebuy period, there is often an “add-on” option. This is one last chance to buy more chips before the tournament becomes a standard freezeout. Usually all players are eligible to take the add-on, but sometimes the add-on is restricted to just those players whose chip count is less than a certain amount.
The strategy of deciding when and whether to make rebuys and add-ons is an advanced topic in tournament equity. But good beginner advice is “when in doubt, make the rebuy”. You usually won’t go far wrong. When you enter a rebuy tournament, you should take this advice into account and plan for the likelihood of investing more than the initial buyin.
For players who are just getting started with tournaments, we recommend trying out a play-money, single-table, sit-and-go no-limit holdem event.
All poker tournaments have one thing in common. After play begins, you can’t stand up and cash out your chips. You must continue to play until you have lost all your chips or you have won everybody else’s chips. Beyond this basic rule, there are a lot of variations.
Get all the latest PokerNews updates on your social media outlets. Follow us on Twitter and find us on both Facebook and Google+!