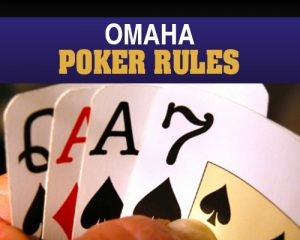 Omaha hold ’em (also known as Omaha holdem or simply Omaha) is a community card poker game similar to Texas hold ’em, where each player is dealt four cards and must make his or her best hand using exactly two of them, plus exactly three of the five community cards. The exact origin of the game is unknown, but casino executive Robert Turner first brought Omaha into a casino setting when he introduced the game to Bill Boyd, who offered it as a game at the Las Vegas Golden Nugget Casino (calling it “Nugget Hold’em”). Omaha uses a 52-card Frenc
If you want to learn more about poker, don’t forget to visit our How to play section!
Two Differences between Hold’em and Omaha

How to Win a Hand
Omaha is a community-card game played with two to ten players on one table. You win chips by winning a pot and you win a pot in one of two ways:

Draw for a Dealer
When you have 2-10 players at the table, each with a stack of chips, you’re ready to start. The first thing you need to do is draw the high card for a dealer.
Deal every player one card face up. The player with the highest ranked card (Aces are high) will start as the game’s dealer. If two players both have the same high card, either deal both players a second card, or use the suits of their card to determine the winner. (Poker suit ordering is alphabetic from worst to best: Clubs, Diamonds, Hearts, Spades)
Ready for start winning at poker? Bet NOW!
Put Out the Dealer Button
When you have a dealer, give that player the dealer button (typically a white disk) used to keep track of the current dealer in the hand. This player needs to shuffle up the cards and prepare to deal the first hand.
Put Out the Blinds
Before the cards are dealt in any hand the two players to the left of the dealer need to put out the blinds. The player directly to the left of the dealer puts out the “small” blind and the player to the left of the small blind puts out the “big” blind.
Eg. small blind is 5c, big blind is 10c.
Deal the Cards
Once the blinds are out, the dealer can deal the cards. Start with the player to the dealer’s left (the small blind) and move clockwise around the table. Each player is dealt one card at a time (face down) until all players have exactly four cards.
Start the First Betting Round
Once the last card is dealt and every player has four cards face down, you are now in the first betting round known as “preflop.” A betting round ends when two conditions are met:

In poker only one player can act at a time, starting at the player to the left of the big blind. This player has three options:

Continue the Action Clockwise
Once the player to the left of the big blind acts, the action moves clockwise around the table. Each player has the same options: fold, call or raise.
The amount of a call or raise is always dependant on the size of the last bet made.
For example, for the first player to call he or she needs to match the size of the big blind. If he or she raises it has to be double the big blind. If ther is a raise the next player has to add the full amount of the big blind + the raise to call.
Big Blind is Last to Act Before Flop
When the action gets back to the small blind he or she can fold, call or raise just like everyone else.
If a raise has been made to 50¢ and the small blind has already paid 5¢, he or she only needs to add 45¢ to call.
If there has been no raise and the current bet is still the same as the original big blind of 10¢, the big blind can check and continue in the hand. If a rasie has come in he or she needs to add the amount less the original 1010¢
Once everyone has had a chance to act and everyone still with a hand has the same amount of money wagered, the preflop betting round is over.
Deal the Flop
Once the preflop betting round is concluded the flop is dealt. In a community-card came such as Omaha, there will be five community cards total for any hand reaching a showdown. The flop is the first three of the five cards dealt.
The dealer discards the top card on the deck face down (this is called the burn card) and then deals three cards face up in the middle of the table.
Start Next Betting Round With Player Left of Dealer
After the flop is dealt the next betting round starts on the first player to the left of the dealer still with a hand (players with a hand are known as “live players”).
This player is in a similar situation to the big blind preflop. He or she can check or bet. The player is not required to add any money to call and they do not need to fold either. A bet in this round is typically equal to the same amount as the big blind.
Continue to Next Player to the Left
Action moves to the next live player to his or her left with the same options available: check (if no bet before), call (match a previous bet), raise (add another bet on top).
Deal the Turn
Once the flop betting round is complete the dealer deals the turn. The card at the top of t
Start Next Betting Round
Once this is done the next betting round starts.
The turn’s betting round is exactly the same as the flop’s with one exception. A single bet on the turn now uses the larger betting limit. Typically the larger betting limit is double the size of the big blind.
Sometimes, mostly for convenience, the large betting limit is slightly larger than double the big blind. This is most common in games such as a $2-$5 Limit game.
Deal the River
Once the turn betting round is complete the final community card is dealt. The dealer discards one final card face down, followed by one card face up.
Start Final Betting Round
Once the river is dealt the final betting round of the hand begins.The river’s betting round is identical in all ways to that of the turn.
Enter the Showdown
When the river betting round has been completed all remaining live players enter into the showdown. The concept of the showdown is simple: the player with the best hand wins the pot.
Push the Pot to the Winner
Once you have discerned the winning hand, that player wins the entire pot. When a pot is won the hand is complete.
Pass the Dealer Button to the Left; Start Over!
After the hand completes the dealer passes the dealer button to the player to his or her left.
At this point you begin the next hand with the two players to the left of the new dealer putting out their blinds.

David Williams Not Ready to Leave Poker Behind