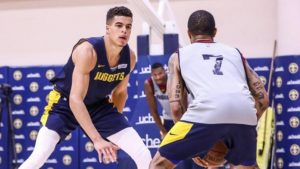 Denver Nuggets fans reportedly will have to wait a little bit longer to see Michael Porter Jr. make his NBA debut.
The Denver Post’s Mike Singer reported Porter suffered a left knee sprain Wednesday and will likely miss the Nuggets’ NBA Las Vegas Summer League games.
Singer added the injury is “not expected to be a long-term issue” and that the Nuggets are being extra-cautious with the rookie.
Denver selected Porter with the 14th overall pick in the 2018 draft, and he didn’t appear in a game this past year while he recovered from back surgery. Back problems caused him to play in only three games at Missouri before he made the jump to the NBA.
In May, Porter indicated his back had healed and he was prepared to suit up for summer league.
“I feel so good,” he said, per Eric Spyropoulos of the Nuggets’ official site. “I’ve worked so hard every day with these guys and I feel like I’m a better player than I’ve ever been. I just want to show that I’m back, feeling good, and ready to play.”
Check BetRegal.com and find the best online betting site.
Nuggets assistant coach Jordi Fernandez gave a glowing review of Porter after watching him practice in preparation for summer league, per The Athletic’s Nick Kosmider: “I’ve been fortunate to be around really good players, and what you see from him is special. He does things where you don’t want to [say] ‘woah’ too loud. He’s pretty special.”
Porter’s injury is clearly frustrating. It will inevitably lead to more questions about his long-term durability, and summer league was a great opportunity for him to return to competitive action since he hasn’t gotten any game time since March 2018.
However, the Nuggets would have more cause for concern if Porter had tweaked his back again.
Get all the latest Betting and Sport News updates on your social media outlets. Find us on both Facebook and Google+
Although summer league would have been valuable for the 21-year-old, it wasn’t worth risking a more serious injury to his knee.
The Suns declined their team option on Fredette for next season, and he joined the Warriors summer league team.