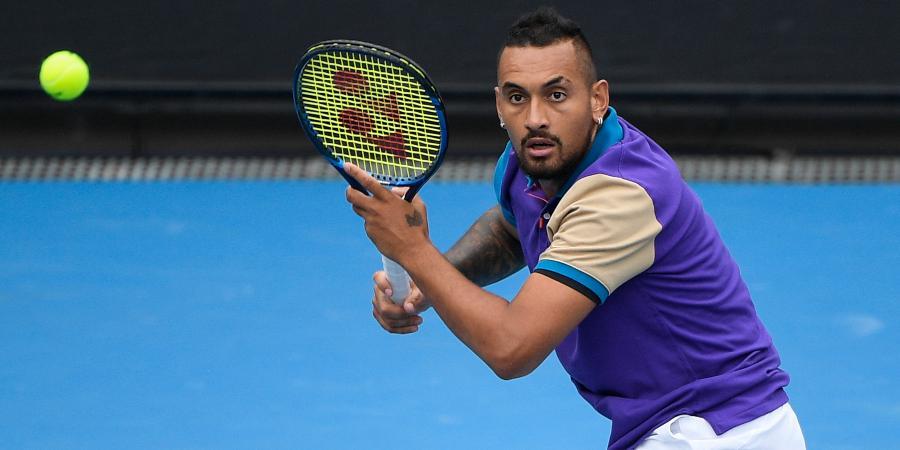 Nick Kyrgios has breathed a sigh of relief after making a typically lively return to tennis following a near year-long hiatus.

Kyrgios overcame a leg injury to reach the second round of an Australian Open warm-up event in Melbourne with a gritty 3-6 6-4 7-6 (7-4) comeback victory over the lowly-ranked Frenchman Alexandre Muller.

The mercurial former dual grand slam quarter-finalist relied on a supreme serving display to pull through versus the world No.209.

He cracked 22 aces in setting up an all-Australian second-round affair with Harry Bourchier at the Murray River Open.

But he also battled mental demons, with the old, cursing Kyrgios resurfacing in his first match in almost 12 months.

“It was a tricky one. I haven’t played a competitive match in about a year, and I dealt with a couple of injuries in the quarantine,” Kyrgios said.

The 25-year-old opted to sit out almost all of 2020, raging against rivals and officials for pressing ahead with the season amid the coronavirus pandemic.

An unusual picture of calm during his run to the fourth round of last year’s Australian Open, where he lost a tight four-setter to Rafa Nadal, Kyrgios was less than serene versus Muller.

Kyrgios claimed on Sunday he didn’t pick up a racquet for four or five months during the pandemic, saying he enjoyed the time out and didn’t really miss tennis.

And he looked less than excited for much of his comeback match.

The now-world No.47 moaned to the chair umpire about towels, berated himself, mumbled to his team about his heavily-strapped left leg and generally looked lackadaisical throughout.

But his class shone through in the end, despite Kyrgios calling for the trainer immediately after leveling the match at one set apiece.

He complained of discomfort particularly when pushing off on serve, saying it also felt unstable when landing on it and taking split steps.

The 2015 Australian Open quarter-finalist served a double-fault on his first point after taking the medical time-out, before proclaiming “not good man, not good”.

But he still won, swelling Australia’s contingent of men through to at least the second round of the Melbourne Summer Series to a dozen.

“Any opponent for me was going to be tricky,” Kyrgios said. “I just wanted to find my feet, see how I felt out here and, again, I somehow pulled it out of the hat. It seems to be the story of my career, so I’m just happy to get through.”